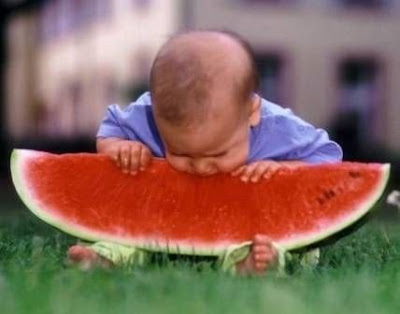 Babies will try anything! This one may have bit off a little more than he (or she) can chew right now, but wait awhile and someday this may be child's play for it to handle. People grow up, mature and will often surprise you. There is an instance in the book of Acts that is like this; read on to see for yourself.
Acts 15:36-40
36 After some days Paul said to Barnabas, "Let's return now and visit our brothers in every city in which we proclaimed the word of the Lord, to see how they are doing."
37 Barnabas planned to take John, who was called Mark, with them also.
38 But Paul didn't think that it was a good idea to take with them someone who had withdrawn from them in Pamphylia, and didn't go with them to do the work.
39 Then the contention grew so sharp that they separated from each other. Barnabas took Mark with him, and sailed away to Cyprus,
40 but Paul chose Silas, and went out, being commended by the brothers to the grace of God.WEB
2 Tim 4:11
11 Only Luke is with me. Take Mark, and bring him with you, for he is useful to me for ministering.WEB
Paul had a problem with John Mark because of Phamphylia, because he had let him down. But there was more to this young assistant than was evident at the time and much later (in Paul's last book) he comments on his usefulness. All this to make a point: people change. So the next time someone lets you down, remember John Mark and give them a break; they just might surprise you. Someday they may handle the whole watermelon themselves.
Email ThisBlogThis!Share to TwitterShare to FacebookShare to Pinterest
Newer Posts Older Posts Home
Subscribe to: Posts (Atom)