Never mind things right now, its how you wind up that counts! 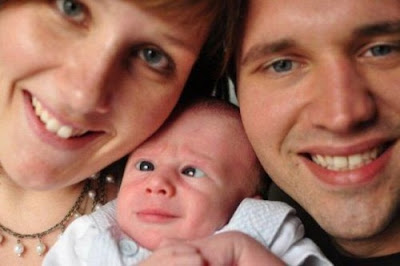 We don't ask to come into this world; sometimes life can be tough at first.  Just ask this little (guy?) one.  Think about Jesus for a couple of minutes as you read this passage....
Luke 2:1-12 (WEB)
1) Now it happened in those days, that a decree went out from Caesar Augustus that all the world should be enrolled.
2) This was the first enrollment made when Quirinius was governor of Syria.
3) All went to enroll themselves, everyone to his own city.
4) Joseph also went up from Galilee, out of the city of Nazareth, into Judea, to the city of David, which is called Bethlehem, because he was of the house and family of David;
5) to enroll himself with Mary, who was pledged to be married to him as wife, being pregnant.
6) It happened, while they were there, that the day had come that she should give birth.
7) She brought forth her firstborn son, and she wrapped him in bands of cloth, and laid him in a feeding trough, because there was no room for them in the inn.
8) There were shepherds in the same country staying in the field, and keeping watch by night over their flock.
9) Behold, an angel of the Lord stood by them, and the glory of the Lord shone around them, and they were terrified.
10) The angel said to them, “Don’t be afraid, for behold, I bring you good news of great joy which will be to all the people.
11) For there is born to you, this day, in the city of David, a Savior, who is Christ the Lord.
12) This is the sign to you: you will find a baby wrapped in strips of cloth, lying in a feeding trough.”

Even Jesus had very humble beginnings as the reference to the feeding trough indicates.  I don't know whether or not he had an expression like the baby in the picture, but ... who knows?  It looks like the baby above has loving parents and somehow I think that little one will get over his irritation and grow up to be a somebody... I know Jesus did!!!!!


PS.. My oldest daughter gave birth to a baby boy yesterday!!!  Way to go Darlene!!!!  That makes nine grand kids so far.  Now if only my youngest daughter would have another one or two... I would be happy... for awhile at least!!!!!
Email ThisBlogThis!Share to TwitterShare to FacebookShare to Pinterest
Newer Posts Older Posts Home
Subscribe to: Posts (Atom)