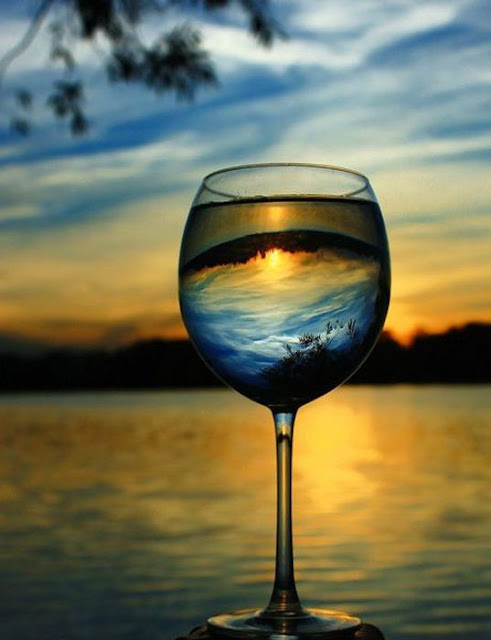 There are truly wonderful lessons from the world around us... if we will only LOOK!  And so it is with this simple glass at sunset.  The liquid in the glass reflects the surroundings, but in reverse.  Which tells me that there is more than one way of looking at something.  This of course is understanding and who better to relate to in this matter than Solomon....
1 The proverbs of Solomon, the son of David, king of Israel:  2 to know wisdom and instruction;to discern the words of understanding;  3 to receive instruction in wise dealing,in righteousness, justice, and equity;  4 to give prudence to the simple,knowledge and discretion to the young man:
5 that the wise man may hear, and increase in learning;that the man of understanding may attain to sound counsel:  6 to understand a proverb, and parables,the words and riddles of the wise.
7 The fear of Yahweh is the beginning of knowledge;but the foolish despise wisdom and instruction.  8 My son, listen to your father’s instruction,and don’t forsake your mother’s teaching:  9 for they will be a garland to grace your head,and chains around your neck.
Understanding is more than just "book learning"!!!  To begin to understand others means beginning to see things as others see them.  Sometimes other people understand things completely opposite of your thoughts and frankly, this drives me crazy.  Rather than just get mad, I try to appreciate their point of view; even when it is obviously wrong.  Truthfully, often there are good reasons why people think as they do and listening goes a long way to coming to a mutual agreement.  This works fine for human interaction, but interplay with the divine is something else.  We are not on equal footing; God is absolute, we are NOT!!!  While the underlined verses above work well with human thinking, verse seven is really the key in this passage.  If your foundation is based on God's word, you have the beginning of wisdom.  He will turn all your up-side-down thinking straight and put you on the right path.  I promise you... the world will never seem the same again!!!!

"THE GOSPEL OF MATTHEW" Chapter Twenty-Eight by Mark Copeland