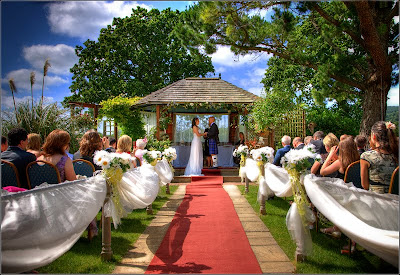 Weddings are wonderful! They are usually planned WAY IN ADVANCE, so there is a lot of excitement! The more elaborate ones have an air of magnificence about them, but whatever the budget, you can sense the anticipation of the bride and groom!! There is just something about them that is electrifying. It must be something like being born for once you do it, you know life is never going to be the same again. "I do" is such a simple promise, but if you mean it, your whole life is committed to one person and one only. Makes me think of this passage from Ephesians.


Ephesians 5:25-32 WEB (R)
(25) Husbands, love your wives, even as Christ also loved the assembly, and gave himself up for it;
(26) that he might sanctify it, having cleansed it by the washing of water with the word,
(27) that he might present the assembly to himself gloriously, not having spot or wrinkle or any such thing; but that it should be holy and without blemish.
(28) Even so husbands also ought to love their own wives as their own bodies. He who loves his own wife loves himself.
(29) For no man ever hated his own flesh; but nourishes and cherishes it, even as the Lord also does the assembly;
(30) because we are members of his body, of his flesh and bones.
(31) "For this cause a man will leave his father and mother, and will be joined to his wife. The two will become one flesh."
(32) This mystery is great, but I speak concerning Christ and of the assembly.


After four decades with the same woman I can tell you that marriage is what you make it; either heaven or hell. If there is love, then no matter how bad things get, there is comfort and joy. Some of the happiest times in our marriage have occurred during the leanest financial periods. Just as this Ephesians passage is a mystery, (see verse 32)so is the bond that strengthens over time. A very special blessing is added to the union if those involved are followers of the risen Christ. This one I can't really explain, it just has to be experienced. Every day is like the line from the old Carpenter's song: "We've only just begun". Oh, yes, one thing that helps is an occasional kiss and "I love you" as often as possible, its like icing on the cake!
Email ThisBlogThis!Share to TwitterShare to FacebookShare to Pinterest
Newer Posts Older Posts Home
Subscribe to: Posts (Atom)