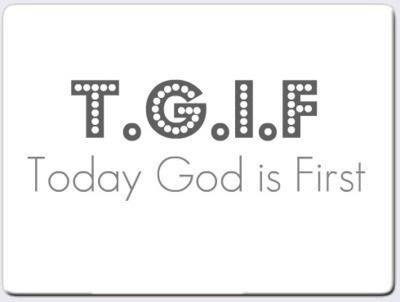 This is a new meaning for me.  Forty five years ago, I would have said Thank God its Friday.  After I had children, it meant; Toes Go in First.  Today's meaning I like the best because it places things in the proper order of importance.  Here is the rest of the story...

Mark, Chapter 12
28 One of the scribes came, and heard them questioning together. Knowing that he had answered them well, asked him, “Which commandment is the greatest of all?”
29 Jesus answered, "“The greatest is, ‘Hear, Israel, the Lord our God, the Lord is one:  30 you shall love the Lord your God with all your heart, and with all your soul, and with all your mind, and with all your strength.’ This is the first commandment.  31 The second is like this, ‘You shall love your neighbor as yourself.’ There is no other commandment greater than these.”"
I could of course, shorten this to LOVE GOD AND DO WHAT YOU LIKE, but L.G.A.D.W.Y.L. just doesn't work at all.  The thing is, that if you really love God and HE IS FIRST, then the second command is no problem.  Why?  Because you would want to please HIM in everything and loving your neighbor becomes as natural as breathing. And by the way, the sign is really optional, what really counts is what you DO ABOUT IT!!!

"THE EPISTLE TO THE GALATIANS" Chapter Four by Mark Copeland