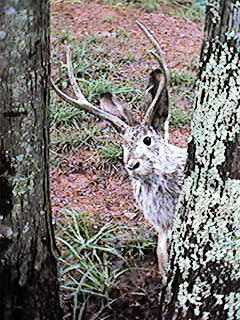 Introducing Nikita, another member of the Jackalope family. You would never know it, but he is the really intelligent one in the family. It has been reported that he actually scored 175 and 190 on tests for intelligence in Russia. He worked for the KGB until the split up of the Soviet Union some years ago, but then moved to the United States to secretly advise president Obama on health care and members of Acorn on how to control the real nuts in their organization. With all his genius, he had a weakness and that was acting. He privately went through surgery so that he could make his antlers removable and used his mastery of disguise to become Michael Waverly on the popular show N.C.I.S.. However, as usual he couldn't control his desire for women and tried to play footsie with a certain Israeli agent. She hit him so hard that he had to wear a truss for a month and when he recovered he ran to the northern forest of Utah to hide among the Mormons. Intrigue, Yes! Reality, No! However all this did make me think of trickery in the Bible and this passage came to mind.
2 Samuel 17:1-16 (WEB)

2 Samuel 17
1) Moreover Ahithophel said to Absalom, “Let me now choose twelve thousand men, and I will arise and pursue after David tonight.
2) I will come on him while he is weary and exhausted, and will make him afraid. All the people who are with him shall flee. I will strike the king only;
3) and I will bring back all the people to you. The man whom you seek is as if all returned. All the people shall be in peace.”
4) The saying pleased Absalom well, and all the elders of Israel.
5) Then Absalom said, “Now call Hushai the Archite also, and let us hear likewise what he says.”
6) When Hushai had come to Absalom, Absalom spoke to him, saying, “Ahithophel has spoken like this. Shall we do what he says? If not, speak up.”
7) Hushai said to Absalom, “The counsel that Ahithophel has given this time is not good.”
8) Hushai said moreover, “You know your father and his men, that they are mighty men, and they are fierce in their minds, like a bear robbed of her cubs in the field. Your father is a man of war, and will not lodge with the people.
9) Behold, he is now hidden in some pit, or in some other place. It will happen, when some of them have fallen at the first, that whoever hears it will say, ‘There is a slaughter among the people who follow Absalom!’
10) Even he who is valiant, whose heart is as the heart of a lion, will utterly melt; for all Israel knows that your father is a mighty man, and those who are with him are valiant men.
11) But I counsel that all Israel be gathered together to you, from Dan even to Beersheba, as the sand that is by the sea for multitude; and that you go to battle in your own person.
12) So shall we come on him in some place where he shall be found, and we will light on him as the dew falls on the ground; and of him and of all the men who are with him we will not leave so much as one.
13) Moreover, if he be gone into a city, then shall all Israel bring ropes to that city, and we will draw it into the river, until there isn’t one small stone found there.”
14) Absalom and all the men of Israel said, “The counsel of Hushai the Archite is better than the counsel of Ahithophel.” For Yahweh had ordained to defeat the good counsel of Ahithophel, to the intent that Yahweh might bring evil on Absalom.
15) Then Hushai said to Zadok and to Abiathar the priests, “Ahithophel counseled Absalom and the elders of Israel that way; and I have counseled this way.
16) Now therefore send quickly, and tell David, saying, ‘Don’t lodge this night at the fords of the wilderness, but by all means pass over; lest the king be swallowed up, and all the people who are with him.’”

Hushai was a spy for David and successfully countered the good advise of the famous counselor, Ahithophel. David had a very interesting life and although its too long to list here, you might want to go back a few chapters and read the whole story. Like the Jackalope Nikita, Ahithophel couldn't handle the situation, but unlike him, later he committed suicide. Just goes to show you that no matter how smart (or wise) you are, God is smarter and is worthy of both respect and fear.
Email ThisBlogThis!Share to TwitterShare to FacebookShare to Pinterest 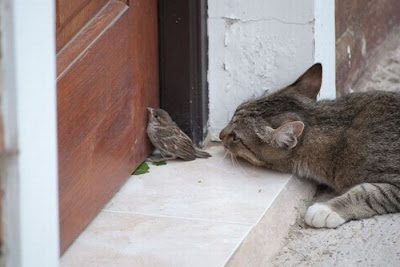 A former boss of mine, Rodger Smith, used to say: "Its really not paranoia, if they are out to get you". This picture proves that the bird has every right to be afraid. Nowhere to run (fly) and a very interested cat just an inch away. Sometimes fear is very justified as in this tale from the Hebrew Bible.

2 Kings 11
1) Now when Athaliah the mother of Ahaziah saw that her son was dead, she arose and destroyed all the seed royal.
2) But Jehosheba, the daughter of king Joram, sister of Ahaziah, took Joash the son of Ahaziah, and stole him away from among the king’s sons who were slain, even him and his nurse, and put them in the bedroom; and they hid him from Athaliah, so that he was not slain;
3) He was with her hidden in the house of Yahweh six years. Athaliah reigned over the land.
4) In the seventh year Jehoiada sent and fetched the captains over hundreds of the Carites and of the guard, and brought them to him into the house of Yahweh; and he made a covenant with them, and took an oath of them in the house of Yahweh, and showed them the king’s son.
5) He commanded them, saying, “This is the thing that you shall do: a third part of you, who come in on the Sabbath, shall be keepers of the watch of the king’s house;
6) A third part shall be at the gate Sur; and a third part at the gate behind the guard. So you shall keep the watch of the house, and be a barrier.
7) The two companies of you, even all who go out on the Sabbath, shall keep the watch of the house of Yahweh around the king.
8) You shall surround the king, every man with his weapons in his hand; and he who comes within the ranks, let him be slain. Be with the king when he goes out, and when he comes in.”
9) The captains over hundreds did according to all that Jehoiada the priest commanded; and they took every man his men, those who were to come in on the Sabbath, with those who were to go out on the Sabbath, and came to Jehoiada the priest.
10) The priest delivered to the captains over hundreds the spears and shields that had been king David’s, which were in the house of Yahweh.
11) The guard stood, every man with his weapons in his hand, from the right side of the house to the left side of the house, along by the altar and the house, around the king.
12) Then he brought out the king’s son, and put the crown on him, and gave him the testimony; and they made him king, and anointed him; and they clapped their hands, and said, “Long live the king!”
13) When Athaliah heard the noise of the guard and of the people, she came to the people into the house of Yahweh:
14) and she looked, and behold, the king stood by the pillar, as the tradition was, and the captains and the trumpets by the king; and all the people of the land rejoiced, and blew trumpets. Then Athaliah tore her clothes, and cried, “Treason! Treason!”
15) Jehoiada the priest commanded the captains of hundreds who were set over the army, and said to them, “Bring her out between the ranks. Kill him who follows her with the sword.” For the priest said, “Don’t let her be slain in the house of Yahweh.”
16) So they made way for her; and she went by the way of the horses’ entry to the king’s house. She was slain there.
17) Jehoiada made a covenant between Yahweh and the king and the people, that they should be Yahweh’s people; between the king also and the people.
18) All the people of the land went to the house of Baal, and broke it down; his altars and his images broke they in pieces thoroughly, and killed Mattan the priest of Baal before the altars. The priest appointed officers over the house of Yahweh.
19) He took the captains over hundreds, and the Carites, and the guard, and all the people of the land; and they brought down the king from the house of Yahweh, and came by the way of the gate of the guard to the king’s house. He sat on the throne of the kings.
20) So all the people of the land rejoiced, and the city was quiet. Athaliah they had slain with the sword at the king’s house.
21) Jehoash was seven years old when he began to reign.

Athaliah's son was Ahaziah and he was wicked. When he died his mother took over and murdered the royal seed. She was eventually killed because God was really out to destroy all the influence of Ahab of Israel in the kingdom of Judah. Athaliah may have thought all this was treason, but in reality it was the cleansing of evil from Judah. Evil may win for a short time, but not forever, because God is watching!
Email ThisBlogThis!Share to TwitterShare to FacebookShare to Pinterest
Newer Posts Older Posts Home
Subscribe to: Posts (Atom)