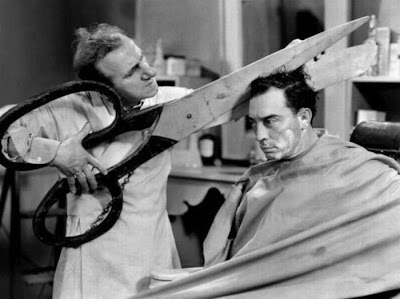 Jimmy Durante and Buster Keaton; what a pair!!!  I have never seen this pre-World War II pair up before.  Durante the consummate showman comedian and Buster Keaton with his physical type of comedy.  All I have to see is the scissors and I almost start laughing.  Its ridiculous because of its size and its lack of fitness for use.  It will probably stay with me all day, because its silly.  One of the things I like about Jesus is his sense of the absurd coupled with his ability to communicate; at times he is quite funny...
WEB: Matthew Chapter 23

[23] “Woe to you, scribes and Pharisees, hypocrites! For you tithe mint, dill, and cumin, and have left undone the weightier matters of the law: justice, mercy, and faith. But you ought to have done these, and not to have left the other undone. [24] You blind guides, who strain out a gnat, and swallow a camel!
The Pharisees had a perspective problem.  They could do the small things right, but when it came to the really weighty matters...Nada.  Verse 24 is true, but comical.  Talk about missing the point.  They might just have carried an over sized scissors around with them... just in case they needed to do a bris...
Email ThisBlogThis!Share to TwitterShare to FacebookShare to Pinterest


Exo 11:1 Yahweh said to Moses, "Yet one plague more will I bring on Pharaoh, and on Egypt; afterwards he will let you go. When he lets you go, he will surely thrust you out altogether.
Exo 11:2 Speak now in the ears of the people, and let them ask every man of his neighbor, and every woman of her neighbor, jewels of silver, and jewels of gold."
Exo 11:3 Yahweh gave the people favor in the sight of the Egyptians. Moreover the man Moses was very great in the land of Egypt, in the sight of Pharaoh's servants, and in the sight of the people.
Exo 11:4 Moses said, "This is what Yahweh says: 'About midnight I will go out into the midst of Egypt,
Exo 11:5 and all the firstborn in the land of Egypt shall die, from the firstborn of Pharaoh who sits on his throne, even to the firstborn of the female servant who is behind the mill; and all the firstborn of livestock.
Exo 11:6 There shall be a great cry throughout all the land of Egypt, such as there has not been, nor shall be any more.
Exo 11:7 But against any of the children of Israel a dog won't even bark or move its tongue, against man or animal; that you may know that Yahweh makes a distinction between the Egyptians and Israel.
Exo 11:8 All these your servants shall come down to me, and bow down themselves to me, saying, "Get out, with all the people who follow you;" and after that I will go out.' " He went out from Pharaoh in hot anger.
Exo 11:9 Yahweh said to Moses, "Pharaoh won't listen to you, that my wonders may be multiplied in the land of Egypt."
Exo 11:10 Moses and Aaron did all these wonders before Pharaoh, and Yahweh hardened Pharaoh's heart, and he didn't let the children of Israel go out of his land.


Mar 3:1 He entered again into the synagogue, and there was a man there who had his hand withered.
Mar 3:2 They watched him, whether he would heal him on the Sabbath day, that they might accuse him.
Mar 3:3 He said to the man who had his hand withered, "Stand up."
Mar 3:4 He said to them, "Is it lawful on the Sabbath day to do good, or to do harm? To save a life, or to kill?" But they were silent.
Mar 3:5 When he had looked around at them with anger, being grieved at the hardening of their hearts, he said to the man, "Stretch out your hand." He stretched it out, and his hand was restored as healthy as the other.
Mar 3:6 The Pharisees went out, and immediately conspired with the Herodians against him, how they might destroy him.
Mar 3:7 Jesus withdrew to the sea with his disciples, and a great multitude followed him from Galilee, from Judea,
Mar 3:8 from Jerusalem, from Idumaea, beyond the Jordan, and those from around Tyre and Sidon. A great multitude, hearing what great things he did, came to him.
Mar 3:9 He spoke to his disciples that a little boat should stay near him because of the crowd, so that they wouldn't press on him.
Mar 3:10 For he had healed many, so that as many as had diseases pressed on him that they might touch him.
Mar 3:11 The unclean spirits, whenever they saw him, fell down before him, and cried, "You are the Son of God!"
Mar 3:12 He sternly warned them that they should not make him known.
Mar 3:13 He went up into the mountain, and called to himself those whom he wanted, and they went to him.
Mar 3:14 He appointed twelve, that they might be with him, and that he might send them out to preach,
Mar 3:15 and to have authority to heal sicknesses and to cast out demons:
Mar 3:16 Simon, to whom he gave the name Peter;
Mar 3:17 James the son of Zebedee; John, the brother of James, and he surnamed them Boanerges, which means, Sons of Thunder;
Mar 3:18 Andrew; Philip; Bartholomew; Matthew; Thomas; James, the son of Alphaeus; Thaddaeus; Simon the Zealot;
Mar 3:19 and Judas Iscariot, who also betrayed him. He came into a house.
Mar 3:20 The multitude came together again, so that they could not so much as eat bread.
Mar 3:21 When his friends heard it, they went out to seize him: for they said, "He is insane."
Mar 3:22 The scribes who came down from Jerusalem said, "He has Beelzebul," and, "By the prince of the demons he casts out the demons."
Mar 3:23 He summoned them, and said to them in parables, "How can Satan cast out Satan?
Mar 3:24 If a kingdom is divided against itself, that kingdom cannot stand.
Mar 3:25 If a house is divided against itself, that house cannot stand.
Mar 3:26 If Satan has risen up against himself, and is divided, he can't stand, but has an end.
Mar 3:27 But no one can enter into the house of the strong man to plunder, unless he first binds the strong man; and then he will plunder his house.
Mar 3:28 Most certainly I tell you, all sins of the descendants of man will be forgiven, including their blasphemies with which they may blaspheme;
Mar 3:29 but whoever may blaspheme against the Holy Spirit never has forgiveness, but is guilty of an eternal sin"
Mar 3:30 -because they said, "He has an unclean spirit."
Mar 3:31 His mother and his brothers came, and standing outside, they sent to him, calling him.
Mar 3:32 A multitude was sitting around him, and they told him, "Behold, your mother, your brothers, and your sisters are outside looking for you."
Mar 3:33 He answered them, "Who are my mother and my brothers?"
Mar 3:34 Looking around at those who sat around him, he said, "Behold, my mother and my brothers!
Mar 3:35 For whoever does the will of God, the same is my brother, and my sister, and mother."