a sense of humor 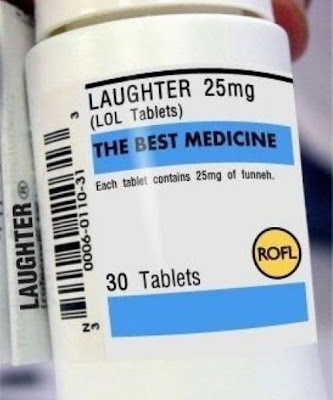 There may be a few of you out there who envision God as a somber, stoic personality. If you fall into this category, this post is for you. Abraham and his wife Sarah were old and God visits them and gives them some "GOOD NEWS".
Genesis 18:1-15 (WEB)
1) Yahweh appeared to him by the oaks of Mamre, as he sat in the tent door in the heat of the day.
2) He lifted up his eyes and looked, and saw that three men stood opposite him. When he saw them, he ran to meet them from the tent door, and bowed himself to the earth,
3) and said, “My lord, if now I have found favor in your sight, please don’t go away from your servant.
4) Now let a little water be fetched, wash your feet, and rest yourselves under the tree.
5) I will get a morsel of bread so you can refresh your heart. After that you may go your way, now that you have come to your servant.” They said, “Very well, do as you have said.”
6) Abraham hurried into the tent to Sarah, and said, “Quickly prepare three measures of fine meal, knead it, and make cakes.”
7) Abraham ran to the herd, and fetched a tender and good calf, and gave it to the servant. He hurried to dress it.
8) He took butter, milk, and the calf which he had dressed, and set it before them. He stood by them under the tree, and they ate.
9) They asked him, “Where is Sarah, your wife?” He said, “See, in the tent.”
10) He said, “I will certainly return to you when the season comes round. Behold, Sarah your wife will have a son.” Sarah heard in the tent door, which was behind him.
11) Now Abraham and Sarah were old, well advanced in age. Sarah had passed the age of childbearing.
12) Sarah laughed within herself, saying, “After I have grown old will I have pleasure, my lord being old also?”
13) Yahweh said to Abraham, “Why did Sarah laugh, saying, ‘Will I really bear a child, yet I am old?’
14) Is anything too hard for Yahweh? At the set time I will return to you, when the season comes round, and Sarah will have a son.”
15) Then Sarah denied, saying, “I didn’t laugh,” for she was afraid. He said, “No, but you did laugh.”
(Genesis 18:1-15, WEB)

Genesis 21:1-7 (WEB)
1) Yahweh visited Sarah as he had said, and Yahweh did to Sarah as he had spoken.
2) Sarah conceived, and bore Abraham a son in his old age, at the set time of which God had spoken to him.
3) Abraham called his son who was born to him, whom Sarah bore to him, Isaac.
4) Abraham circumcised his son, Isaac, when he was eight days old, as God had commanded him.
5) Abraham was one hundred years old when his son, Isaac, was born to him.
6) Sarah said, “God has made me laugh. Everyone who hears will laugh with me.”
7) She said, “Who would have said to Abraham, that Sarah would nurse children? For I have borne him a son in his old age.”
(Genesis 21:1-7, WEB)

Sarah disbelieved God. And she showed it by laughter. But God had the "last laugh": Sarah, an old woman, really did have a son in her old age. Sometimes, things are just too coincidental; the son that Sarah bore was named Issac (he who laughs). God turned the laughter of disbelief into the laughter of JOY. You just gotta love the whole thing.... who says God doesn't have a sense of humor....
Email ThisBlogThis!Share to TwitterShare to FacebookShare to Pinterest
Newer Posts Older Posts Home
Subscribe to: Posts (Atom)