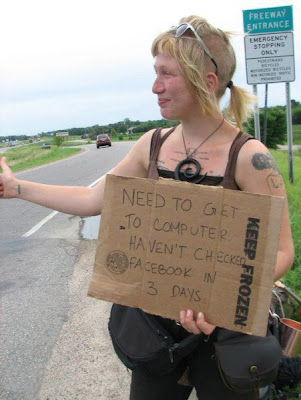 This picture is a sign of the times.  How entwined with technology we are!  Even though we may not have a car, still a computer is a necessity.  Not just a computer, a website!  Direct interpersonal relationships are becoming a thing of the past and those we have are via electronic means.  We have added the machine to our life and it has replaced the natural order of things.  Yet, if used correctly, even the digital world can add to our spirituality.  Consider these words of the apostle Peter for a moment....


3) seeing that his divine power has granted to us all things that pertain to life and godliness, through the knowledge of him who called us by his own glory and virtue;

4) by which he has granted to us his precious and exceedingly great promises; that through these you may become partakers of the divine nature, having escaped from the corruption that is in the world by lust.

6) and in knowledge, self-control; and in self-control patience; and in patience godliness;

8) For if these things are yours and abound, they make you to be not idle nor unfruitful to the knowledge of our Lord Jesus Christ.

9) For he who lacks these things is blind, seeing only what is near, having forgotten the cleansing from his old sins.

10) Therefore, brothers, be more diligent to make your calling and election sure. For if you do these things, you will never stumble.

11) For thus you will be richly supplied with the entrance into the eternal Kingdom of our Lord and Savior, Jesus Christ.


God has blessed us in many ways and the computer can be a blessing as well, so why not use it to grow closer to the God of the heavens.  Just as it can help us keep in touch with our friends, so it can be used in the study of the Scriptures and this can help us grow spiritually.
PS.  I have started to post the daily readings from my Easy Read Old and New Testaments on the website.  The daily readings start out small and gradually increase, so that at the end of a year the entire Bible is read through completely (or two years if you want to do the New Testament first)
Email ThisBlogThis!Share to TwitterShare to FacebookShare to Pinterest

Num 5:2 "Command the children of Israel that they put out of the camp every leper, and everyone who has an issue, and whoever is unclean by the dead.

Num 5:3 Both you shall put male and female outside of the camp; that they not defile their camp, in the midst of which I dwell."

Num 5:6 "Speak to the children of Israel: When a man or woman commits any sin that men commit, so as to trespass against Yahweh, and that soul is guilty;

Num 5:7 then he shall confess his sin which he has done, and he shall make restitution for his guilt in full, and add to it the fifth part of it, and give it to him in respect of whom he has been guilty.

Num 5:8 But if the man has no kinsman to whom restitution may be made for the guilt, the restitution for guilt which is made to Yahweh shall be the priest's; besides the ram of the atonement, by which atonement shall be made for him.

Num 5:9 Every heave offering of all the holy things of the children of Israel, which they present to the priest, shall be his.

Num 5:10 Every man's holy things shall be his: whatever any man gives the priest, it shall be his."

Num 5:12 "Speak to the children of Israel, and tell them: If any man's wife goes astray, and is unfaithful to him,

Num 5:13 and a man lies with her carnally, and it is hidden from the eyes of her husband, and is kept close, and she is defiled, and there is no witness against her, and she isn't taken in the act;

Num 5:16 The priest shall bring her near, and set her before Yahweh;

Num 5:19 The priest shall cause her to swear, and shall tell the woman, 'If no man has lain with you, and if you haven't gone aside to uncleanness, being under your husband, be free from this water of bitterness that brings a curse.

Num 5:20 But if you have gone astray, being under your husband, and if you are defiled, and some man has lain with you besides your husband:'

Num 5:21 then the priest shall cause the woman to swear with the oath of cursing, and the priest shall tell the woman, 'Yahweh make you a curse and an oath among your people, when Yahweh allows your thigh to fall away, and your body to swell;

Num 5:22 and this water that brings a curse will go into your bowels, and make your body swell, and your thigh fall away.' The woman shall say, 'Amen, Amen.'

Num 5:23 "The priest shall write these curses in a book, and he shall blot them out into the water of bitterness.

Num 5:26 The priest shall take a handful of the meal offering, as its memorial, and burn it on the altar, and afterward shall make the woman drink the water.

Num 5:27 When he has made her drink the water, then it shall happen, if she is defiled, and has committed a trespass against her husband, that the water that causes the curse will enter into her and become bitter, and her body will swell, and her thigh will fall away: and the woman will be a curse among her people.

Num 5:28 If the woman isn't defiled, but is clean; then she shall be free, and shall conceive seed.

Num 5:29 "This is the law of jealousy, when a wife, being under her husband, goes astray, and is defiled;

Num 5:30 or when the spirit of jealousy comes on a man, and he is jealous of his wife; then he shall set the woman before Yahweh, and the priest shall execute on her all this law.

Num 5:31 The man shall be free from iniquity, and that woman shall bear her iniquity."

Num 6:2 "Speak to the children of Israel, and tell them: When either man or woman shall make a special vow, the vow of a Nazirite, to separate himself to Yahweh,

Num 6:3 he shall separate himself from wine and strong drink. He shall drink no vinegar of wine, or vinegar of fermented drink, neither shall he drink any juice of grapes, nor eat fresh grapes or dried.

Num 6:4 All the days of his separation he shall eat nothing that is made of the grapevine, from the seeds even to the skins.

Num 6:5 "All the days of his vow of separation there shall no razor come on his head, until the days are fulfilled, in which he separates himself to Yahweh. He shall be holy. He shall let the locks of the hair of his head grow long.

Num 6:6 "All the days that he separates himself to Yahweh he shall not go near a dead body.

Num 6:7 He shall not make himself unclean for his father, or for his mother, for his brother, or for his sister, when they die; because his separation to God is on his head.

Num 6:8 All the days of his separation he is holy to Yahweh.

Num 6:9 "If any man dies very suddenly beside him, and he defiles the head of his separation; then he shall shave his head in the day of his cleansing. On the seventh day he shall shave it.

Num 6:10 On the eighth day he shall bring two turtledoves or two young pigeons to the priest, to the door of the Tent of Meeting.

Num 6:11 The priest shall offer one for a sin offering, and the other for a burnt offering, and make atonement for him, because he sinned by reason of the dead, and shall make his head holy that same day.

Num 6:12 He shall separate to Yahweh the days of his separation, and shall bring a male lamb a year old for a trespass offering; but the former days shall be void, because his separation was defiled.

Num 6:13 "This is the law of the Nazirite: when the days of his separation are fulfilled, he shall be brought to the door of the Tent of Meeting,

Num 6:16 The priest shall present them before Yahweh, and shall offer his sin offering, and his burnt offering.

Num 6:17 He shall offer the ram for a sacrifice of peace offerings to Yahweh, with the basket of unleavened bread. The priest shall offer also its meal offering, and its drink offering.

Num 6:20 and the priest shall wave them for a wave offering before Yahweh. This is holy for the priest, together with the breast that is waved and the thigh that is offered. After that the Nazirite may drink wine.

Num 6:21 "This is the law of the Nazirite who vows, and of his offering to Yahweh for his separation, besides that which he is able to get. According to his vow which he vows, so he must do after the law of his separation."

Num 6:23 "Speak to Aaron and to his sons, saying, 'This is how you shall bless the children of Israel.' You shall tell them,

Num 6:25 Yahweh make his face to shine on you, and be gracious to you.

Num 6:26 Yahweh lift up his face toward you, and give you peace.'

Num 6:27 "So they shall put my name on the children of Israel; and I will bless them."
Email ThisBlogThis!Share to TwitterShare to FacebookShare to Pinterest
Newer Posts Older Posts Home
Subscribe to: Posts (Atom)