Politics under a beautiful sky 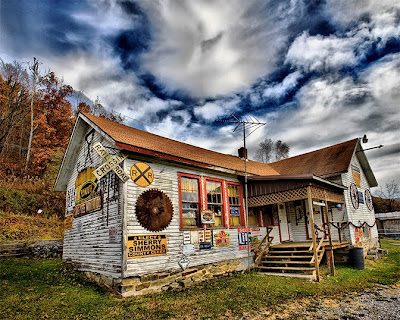 What a grand sky! Too bad the building has signs all over it; especially those pesky political ones. Like it or not, politics somehow manages to infiltrate our everyday life. Today was no exception; as I sat down to watch TV, the presidents inaugural address was on. I liked much of what he said, (which is unusual for me) but somehow something just didn't seem to ring true. I went away with the feeling that nothing has changed and nothing will until we have a true three party system in this country. Politics is nothing new, its even in the Bible. Consider the book of Acts for example.

Act 24:22 But Felix, having more exact knowledge concerning the Way, deferred them, saying, "When Lysias, the commanding officer, comes down, I will decide your case."
Act 24:23 He ordered the centurion that Paul should be kept in custody, and should have some privileges, and not to forbid any of his friends to serve him or to visit him.
Act 24:24 But after some days, Felix came with Drusilla, his wife, who was a Jewess, and sent for Paul, and heard him concerning the faith in Christ Jesus.
Act 24:25 As he reasoned about righteousness, self-control, and the judgment to come, Felix was terrified, and answered, "Go your way for this time, and when it is convenient for me, I will summon you."
Act 24:26 Meanwhile, he also hoped that money would be given to him by Paul, that he might release him. Therefore also he sent for him more often, and talked with him.
Act 24:27 But when two years were fulfilled, Felix was succeeded by Porcius Festus, and desiring to gain favor with the Jews, Felix left Paul in bonds.

Felix was a consummate politician. He put off what he did not want to hear, longed for money and allowed the powers that be a say in his decisions. Sound familiar? It should; it heard the something similar on the TV tonight. Democrats and Republicans will do what they have to do to get re-elected. Like Felix, I have do doubt that they know right from wrong; they just lack to political will to do it! We need people in office who have Christian values, Christian ideals and will have a Christian agenda. Not a popular view to hold, but then again, I don't have to deal with the same people that Felix did. I just have to listen to Christ; I wonder if the people in Washington will listen?
Email ThisBlogThis!Share to TwitterShare to FacebookShare to Pinterest
Newer Posts Older Posts Home
Subscribe to: Posts (Atom)