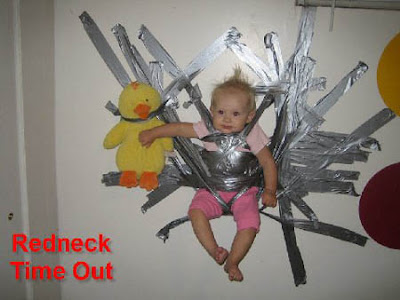 Its hard not to look at this picture and not think of Jeff Foxworthy. Actually, some of his jokes are funny, unless you actually happen TO BE A REDNECK, of course. Then, its not quite so funny! How easy it is to make fun of those who we consider unsophisticated, uneducated or perhaps a little on the "simple" side; yet God has chosen them to be part of HIS GREAT PLAN TO REDEEM THE HUMAN RACE. Read the following passage and I think you will see what I mean:
Mat 26:67 Then they spit in his face and struck him. And some slapped him,
Mat 26:68 saying, "Prophesy to us, you Christ! Who is it that struck you?"
Mat 26:69 Now Peter was sitting outside in the courtyard. And a servant girl came up to him and said, "You also were with Jesus the Galilean."
Mat 26:70 But he denied it before them all, saying, "I do not know what you mean."
Mat 26:71 And when he went out to the entrance, another servant girl saw him, and she said to the bystanders, "This man was with Jesus of Nazareth."
Mat 26:72 And again he denied it with an oath: "I do not know the man."
Mat 26:73 After a little while the bystanders came up and said to Peter, "Certainly you too are one of them, for your accent betrays you."
Mat 26:74 Then he began to invoke a curse on himself and to swear, "I do not know the man." And immediately the rooster crowed.
Mat 26:75 And Peter remembered the saying of Jesus, "Before the rooster crows, you will deny me three times." And he went out and wept bitterly
English Standard Version
Galileans were considered "rednecks". They were the backwater people of their day, yet God chose to use THEM. Take a "time out" and think about it; God can use anyone HE desires to accomplish HIS WILL. Don't let the duck tape of this world hold you back; do whatever you can to further the cause of Christ; just don't talk too loud, your accent might give you away!
Email ThisBlogThis!Share to TwitterShare to FacebookShare to Pinterest
Newer Posts Older Posts Home
Subscribe to: Posts (Atom)