A message from the other side 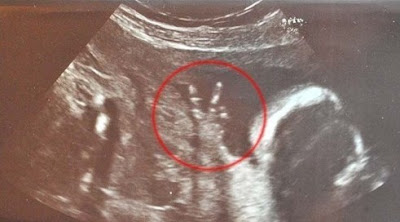 Babies change everything! Suddenly your concerns are not centered on your own little needs but on the life of another. If you have more than a child or two, then you notice how differently they behave almost from the moment of birth. My oldest needed attention all the time, my middle child was calm and almost always contented and the the youngest hated to be wet and we went nuts with diaper changes. Honestly, we never thought much about their personality before birth, but in recent years photos like the one above do raise the question of what babies are like before they enter into the world. I don't know, but God does and in at least one instance I can think of God had predetermined his future life. Read on to find out a little more.
Jer 1:1-8 1 The words of Jeremiah the son of Hilkiah, of the priests who were in Anathoth in the land of Benjamin:
2 to whom the word of Yahweh came in the days of Josiah the son of Amon, king of Judah, in the thirteenth year of his reign.
3 It came also in the days of Jehoiakim the son of Josiah, king of Judah, to the end of the eleventh year of Zedekiah, the son of Josiah, king of Judah, to the carrying away of Jerusalem captive in the fifth month.
4 Now the word of Yahweh came to me, saying,
5 Before I formed you in the belly I knew you, and before you came forth out of the womb I sanctified you; I have appointed you a prophet to the nations.
6 Then said I, Ah, Lord Yahweh! behold, I don't know how to speak; for I am a child.
7 But Yahweh said to me, Don't say, I am a child; for to whoever I shall send you, you shall go, and whatever I shall command you, you shall speak.
8 Don't be afraid because of them; for I am with you to deliver you, says Yahweh.WEB
To me, this is a bit of a mystery; how God forms an unborn child is knowledge I won't have until I reach heaven (if even then), but verse 5 says it plainly. God has a part in our reproduction and destiny whether we like it or not; whether we BELIEVE IT OR NOT! If you think about it, this little verse says volumes about birth control, because if this is God's doing, then any interference in the process could be considered as fighting against God. We can do marvelous things with the medical knowledge that exists today, but I can't help but wonder if we rely too much on what WE CAN DO and not enough on what God has set in motion. Think about it, because it won't be very long before we can not only clone people, but design them as well. I can't even imagine what God will think about those abilities. In any event, this picture is of a baby who is giving the peace sign, so perhaps this is God's neonatal message; I know it was Jesus'.
Email ThisBlogThis!Share to TwitterShare to FacebookShare to Pinterest
Newer Posts Older Posts Home
Subscribe to: Posts (Atom)