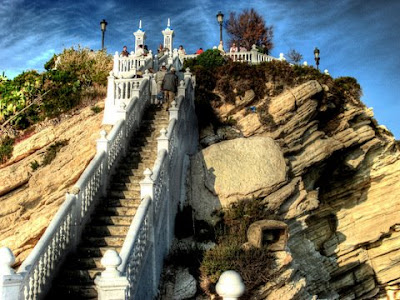 This picture is entitled "stairway to heaven" and it certainly does point in the right direction. It made me think of the Led Zeppelin song of the same name. That song has become one of my favorites after I read an article describing it as a rock and roll song with a hidden Christian message. Whether or not that is true is up for grabs, but one thing leads to another and THAT SONG made me think of this passage from the Bible.
John 1:47-51
47 Jesus saw Nathanael coming to him, and said about him, "Behold, an Israelite indeed, in whom is no deceit!"
48 Nathanael said to him, "How do you know me?" Jesus answered him, "Before Philip called you, when you were under the fig tree, I saw you."
49 Nathanael answered him, "Rabbi, you are the Son of God! You are King of Israel!"
50 Jesus answered him, "Because I told you, 'I saw you underneath the fig tree,' do you believe? You will see greater things than these!"
51 He said to him, "Most assuredly, I tell you, hereafter you will see heaven opened, and the angels of God ascending and descending on the Son of Man."WEB
One thing is for certain, you can't buy your way into heaven, but there is a way there and its through Jesus. Music is probably optional.
Email ThisBlogThis!Share to TwitterShare to FacebookShare to Pinterest
Newer Posts Older Posts Home
Subscribe to: Posts (Atom)