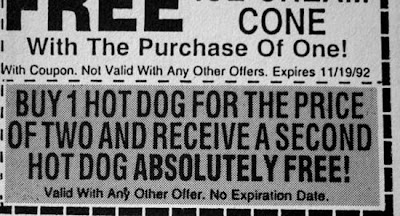 Read all sales ads closely. This one is a pip! A bad deal is made to sound like a good one in advertising, so be careful; sometimes you won't get what you think you will. Judas was someone who wasn't careful, and a little on the greedy side. At best, he thought he could force Jesus into becoming another David, at worse, well, he couldn't have done worse. When you link these passages together, the deal unfolds.

Matthew 26:14-16 WEB (R)
(14) Then one of the twelve, who was called Judas Iscariot, went to the chief priests,
(15) and said, "What are you willing to give me, that I should deliver him to you?" They weighed out for him thirty pieces of silver.
(16) From that time he sought opportunity to betray him.

Matthew 27:3-5 WEB (R)
(3) Then Judas, who betrayed him, when he saw that Jesus was condemned, felt remorse, and brought back the thirty pieces of silver to the chief priests and elders,
(4) saying, "I have sinned in that I betrayed innocent blood." But they said, "What is that to us? You see to it."
(5) He threw down the pieces of silver in the sanctuary, and departed. He went away and hanged himself.


Judas betrayed Jesus. Even an attempt to try to give the blood money back couldn't stop the completion of this bad deal. It was too much for him; he committed suicide. Sin is like that; you never get what you thought you would, instead things go sour and events turn out badly. No matter how strong you think you are, Satan is stronger. Only God has the power to overcome his schemes. Instead of reading ads, read the "GOOD BOOK" instead, I know that you will find its deal of grace far better than works really "GOOD NEWS"!!!
Email ThisBlogThis!Share to TwitterShare to FacebookShare to Pinterest
Newer Posts Older Posts Home
Subscribe to: Posts (Atom)