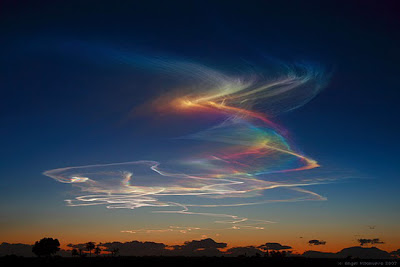 I grew up in upstate New York in the fifties; very long ago and far from my home in Florida. TV was black and white then and one of the shows that I enjoyed most as a kid was Freddy Freihoffer. Basically, there was an artist who interacted with a group of kids by asking one of them to make a "squiggle" on a very large tablet. From their very simple drawing he would make a picture and talk about it. Oh, what he could do with even the simplest scratches. This picture reminds me of those days, except, this is in color of course. I wonder, if God made squiggles, what would one look like? You know, HE is pretty good at creating things. Check out the following verses.
Genesis 1:6-8 (WEB)
6) God said, “Let there be an expanse in the middle of the waters, and let it divide the waters from the waters.”
7) God made the expanse, and divided the waters which were under the expanse from the waters which were above the expanse; and it was so.
8) God called the expanse “sky.” There was evening and there was morning, a second day.
(Genesis 1:6-8, WEB)

Think about it; a squiggle that is continually changing, in size, shape and color. WOW! Somehow makes the Freddy Freihoffer show seem tame. What next? Consider...land. But that's the stuff of another blog. As a side note... if anyone knows what the above picture is... please let me know.
Thanks a lot... Gary
Email ThisBlogThis!Share to TwitterShare to FacebookShare to Pinterest
Newer Posts Older Posts Home
Subscribe to: Posts (Atom)