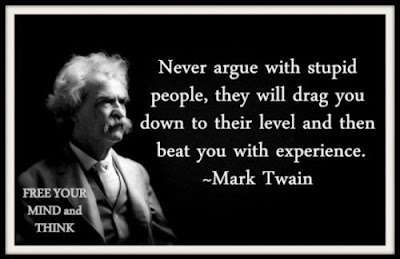 In the early 70's I worked for Norton Co. as a quality control supervisor on the overnight shift.  My area of supervision was the cloth finishing department.  You know, Emery cloth and the like.  It was a difficult job and at times very, very stressful, but it did have  its upside.  The people I worked with were an unusual bunch of peculiar people.  The MOST MEMORABLE of which was a man named Mike.  He had a odd way of mixing the most outlandish behavior with genuine insight and profound wisdom. He would say things like: "You can say anything you like as long as it is the truth and you smile a little too much" or "Never tell an idiot that he is an idiot, all you are going to do is remind him and that will make him mad."  When I saw this saying of Mark Twain (who also had a memorable sense of humor) I thought of this verse from the book of Proverbs....

Proverbs 15:1
1 A gentle answer turns away wrath,
but a harsh word stirs up anger.

There are so many people who don't think before they talk or act that you will encounter them; probably on a weekly basis at least.  When this happens the worst thing you can do is match their volume and anger level.  The softer you speak (if at all), the better.  There is a right way to handle (idiots, stupid, obnoxious, foolish or arrogant aggressive) them and Proverbs has the answer.  You might also want to listen to Mark Twain and even somebody like my friend (yes, he was my friend) Mike.  Wisdom comes in packages of all shapes and sizes, so listen, somebody may actually teach you something.  And smile, the bigger and more exaggerated the better!!!!!

"THE GOSPEL OF MATTHEW" Chapter Nine by Mark Copeland