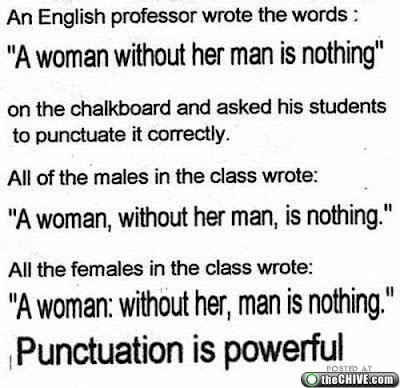 From the moment of birth we are defined by our sex. Common sense will tell you: boys and girls are just naturally different. No matter what society you consider, there is a constant friction between the seses. Men want too much control over the female of the species and so do women. All this leads to strife, but it really doesn't have to be that way. Read some of what Paul had to say:
1Co 11:1-16 ESV
(1) Be imitators of me, as I am of Christ.
(2) Now I commend you because you remember me in everything and maintain the traditions even as I delivered them to you.
(3) But I want you to understand that the head of every man is Christ, the head of a wife is her husband, and the head of Christ is God.
(4) Every man who prays or prophesies with his head covered dishonors his head,
(5) but every wife who prays or prophesies with her head uncovered dishonors her head, since it is the same as if her head were shaven.
(6) For if a wife will not cover her head, then she should cut her hair short. But since it is disgraceful for a wife to cut off her hair or shave her head, let her cover her head.
(7) For a man ought not to cover his head, since he is the image and glory of God, but woman is the glory of man.
(8) For man was not made from woman, but woman from man.
(9) Neither was man created for woman, but woman for man.
(10) That is why a wife ought to have a symbol of authority on her head, because of the angels.
(11) Nevertheless, in the Lord woman is not independent of man nor man of woman;
(12) for as woman was made from man, so man is now born of woman. And all things are from God.
(13) Judge for yourselves: is it proper for a wife to pray to God with her head uncovered?
(14) Does not nature itself teach you that if a man wears long hair it is a disgrace for him,
(15) but if a woman has long hair, it is her glory? For her hair is given to her for a covering.
(16) If anyone is inclined to be contentious, we have no such practice, nor do the churches of God.

Different from the creation, made for different purposes, with different characteristics and strengths, each compliments the other. They why so many problems? I think it is because God is left out of the equation. Instead of worrying about greatness or power in a relationship, why not focus on God instead. Man is the head of woman (as defined as the source, or the head-water, if you will) and woman comes from man and is for him. Relationships that are meaningful, go far beyond power and reach even to the heights of true love. No matter how you punctuate the paragraph at the top, if God is guiding both individuals, then everything will be OK! Now, if I just could get my own spouse to listen to this I would be in great shape. But, who knows, maybe someday........
Email ThisBlogThis!Share to TwitterShare to FacebookShare to Pinterest
Newer Posts Older Posts Home
Subscribe to: Posts (Atom)