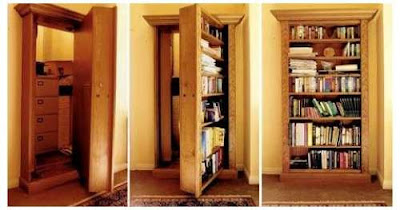 This picture seemed a little odd to me, then I looked at it from RIGHT to LEFT.  Not just a bookcase, it is a secret room for valuables (and perhaps an emergency panic room as well).  Tricky, very tricky, indeed.  Whatever it was meant for, it must be important because of the obvious cost of making such a thing.  If the mind of man could conceive of such a thing, what must the mind of GOD be capable of?  So, we are naturally led to the book of Ephesians...
Ephesians 3:1-12 (WEB)
1) For this cause I, Paul, am the prisoner of Christ Jesus on behalf of you Gentiles,
2) if it is so that you have heard of the administration of that grace of God which was given me toward you;
3) how that by revelation the mystery was made known to me, as I wrote before in few words,
4) by which, when you read, you can perceive my understanding in the mystery of Christ;
5) which in other generations was not made known to the children of men, as it has now been revealed to his holy apostles and prophets in the Spirit;
6) that the Gentiles are fellow heirs, and fellow members of the body, and fellow partakers of his promise in Christ Jesus through the Good News,
7) of which I was made a servant, according to the gift of that grace of God which was given me according to the working of his power.
8) To me, the very least of all saints, was this grace given, to preach to the Gentiles the unsearchable riches of Christ,
9) and to make all men see what is the administration of the mystery which for ages has been hidden in God, who created all things through Jesus Christ;
10) to the intent that now through the assembly the manifold wisdom of God might be made known to the principalities and the powers in the heavenly places,
11) according to the eternal purpose which he purposed in Christ Jesus our Lord;
12) in whom we have boldness and access in confidence through our faith in him.


God chose the Hebrews and gave them Laws to obey and set them apart from the whole world.  To them, it must have seemed incredible that God would choose people who they would consider "unclean" for blessings.  Yet, God had a plan that included everyone; one that went beyond rules and regulations, which had its foundation in love.  The God of Heaven revealed this to Paul and he to us, so that we might also understand that a doorway to heaven has been revealed.  Who will enter... will you?
Email ThisBlogThis!Share to TwitterShare to FacebookShare to Pinterest