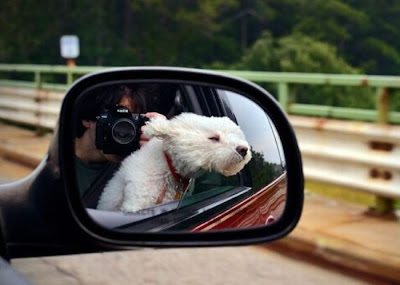 One of my granddaughters came over for a visit today and this picture reminded me of that visit.  She is absolutely mad about her dog Hercules (Herkuuleesss, her pronunciation) and it is a rare occasion that she doesn't mention him.  The photographer must feel the same way, or this picture wouldn't have been taken.  But, I wonder... why do dogs love to do this so much?  Since they can't talk, I guess I will never know, but my best guess is that they feel they have to do it!!!  Some people are like that too; they feel drawn to something that they simply have to do; whether or not it is right.  Judah (the southern nation) became like that and their spiritual adultery against the God who brought them out of Egypt had reached a terrible state.  Here is how God put it, through the prophet Jeremiah.
WEB: Jeremiah Chapter 13
[15] Hear, and give ear; don’t be proud; for Yahweh has spoken. [16] Give glory to Yahweh your God, before he causes darkness, and before your feet stumble on the dark mountains, and, while you look for light, he turns it into the shadow of death, and makes it gross darkness. [17] But if you will not hear it, my soul shall weep in secret for your pride; and my eye shall weep bitterly, and run down with tears, because Yahweh’s flock is taken captive. [18] Say to the king and to the queen mother, Humble yourselves, sit down; for your headdresses have come down, even the crown of your glory. [19] The cities of the South are shut up, and there is none to open them: Judah is carried away captive, all of it; it is wholly carried away captive. [20] Lift up your eyes, and see those who come from the north: where is the flock that was given you, your beautiful flock? [21] What will you say, when he shall set over you as head those whom you have yourself taught to be friends to you? shall not sorrows take hold of you, as of a woman in travail? [22] If you say in your heart, Why are these things come on me? for the greatness of your iniquity are your skirts uncovered, and your heels suffer violence. [23] Can the Ethiopian change his skin, or the leopard his spots? then may you also do good, who are accustomed to do evil. [24] Therefore will I scatter them, as the stubble that passes away, by the wind of the wilderness. [25] This is your lot, the portion measured to you from me, says Yahweh; because you have forgotten me, and trusted in falsehood. [26] Therefore will I also uncover your skirts on your face, and your shame shall appear. [27] I have seen your abominations, even your adulteries, and your neighing, the lewdness of your prostitution, on the hills in the field. Woe to you, Jerusalem! You will not be made clean; how long shall it yet be?
Destruction, judgment and disaster beyond anything they could think or imagine was about to happen.  Why? Because Judah loved sin and would not (and simply could no longer) stop their evil ways.  All this makes me think of the current condition of government in our country.  Both political sides have become so polarized that compromise has become impossible and this nation will suffer as a result.  Its not only the government; its also the lack of morality of the people themselves.  Consider how the family has disintegrated over the past few decades and a prime example of this is huge number of children born into one parent homes.  A life without God was about to destroy Judah and could the United States of America be any different?  Have we gone so far from the Almighty that we can't change?  For all our sakes, I hope not!!!  People have the capacity to change, but what remains to be seen is if they have the will...
Email ThisBlogThis!Share to TwitterShare to FacebookShare to Pinterest