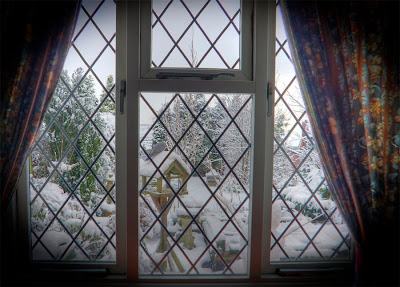 Just an ordinary winter picture, nothing special at all, but wait, it could have been taken in northern FLORIDA. Recently, there has been snow in the Tampa area and even sleet in Dade City. Huh?? Many, many people have told me that there has not been snow here since 1977; so much for global warming. It seems that life just keeps handing me one surprise after another, and just when you think you have seen everything; whamoo! Jesus addressed the seeming unlikely too, in response to a question by the Pharisees.

Luke 17:20-36 WEB (R)
(20) Being asked by the Pharisees when the Kingdom of God would come, he answered them, "The Kingdom of God doesn't come with observation;
(21) neither will they say, 'Look, here!' or, 'Look, there!' for behold, the Kingdom of God is within you."
(22) He said to the disciples, "The days will come, when you will desire to see one of the days of the Son of Man, and you will not see it.
(23) They will tell you, 'Look, here!' or 'Look, there!' Don't go away, nor follow after them,
(24) for as the lightning, when it flashes out of the one part under the sky, shines to the other part under the sky; so will the Son of Man be in his day.
(25) But first, he must suffer many things and be rejected by this generation.
(26) As it happened in the days of Noah, even so will it be also in the days of the Son of Man.
(27) They ate, they drank, they married, they were given in marriage, until the day that Noah entered into the ship, and the flood came, and destroyed them all.
(28) Likewise, even as it happened in the days of Lot: they ate, they drank, they bought, they sold, they planted, they built;
(29) but in the day that Lot went out from Sodom, it rained fire and sulfur from the sky, and destroyed them all.
(30) It will be the same way in the day that the Son of Man is revealed.
(31) In that day, he who will be on the housetop, and his goods in the house, let him not go down to take them away. Let him who is in the field likewise not turn back.
(32) Remember Lot's wife!
(33) Whoever seeks to save his life loses it, but whoever loses his life preserves it.
(34) I tell you, in that night there will be two people in one bed. The one will be taken, and the other will be left.
(35) There will be two grinding grain together. One will be taken, and the other will be left."
(36) Two will be in the field: the one taken, and the other left."

I don't think anybody really LIKES to think about a judgment of God, let alone THE JUDGMENT OF GOD!! But, Jesus does talk about it. To some of us, it may seem unlikely, but hey; who would have thought it would snow in warm, sunny FLORIDA? Since winter is far from over, maybe I should think about buying a pair of warm gloves or a scarf? And thinking about the destiny of ones eternal soul is always a good idea as well!!! All this may sound a bit paranoid, but life is full of surprises and I really don't need any more right now, especially if it involves something as important as heaven or hell!!!
Email ThisBlogThis!Share to TwitterShare to FacebookShare to Pinterest
Newer Posts Older Posts Home
Subscribe to: Posts (Atom)