The desire for a little fire! 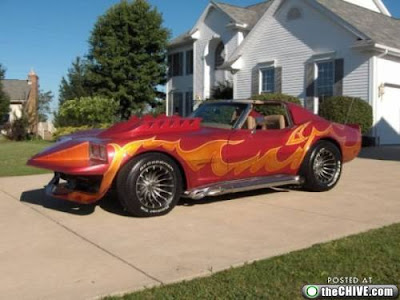 Now this is a car! What a fire breathing monster this must be! I doubt if it even gets 10 mph.. Although I love to look at it, its not exactly built for someone who has my round build, so I don't think it would do me any good to even THINK of owning this. But I bet this puppy would really go fast! When I saw this "flame of fire" corvette I thought of the following passage from the book of Hebrews.

Hebrews 1:1-8 Complete Apostles' Bible
(1) God, who in various ways and in many ways spoke in time past to the fathers by the prophets,
(2) has in these last days spoken to us by the Son, whom He has appointed heir of all things, through whom also He made the worlds;
(3) who being the effulgence of His glory and the exact expression of His substance, and upholding all things by the word of His power, when He had by Himself purged our sins, sat down at the right hand of the Majesty on high,
(4) having become so much better than the angels, as He has inherited a more excellent name than they.
(5) For to which of the angels did He ever say: "You are My Son, today I have begotten You"? And again: "I will be to Him for a Father, and He shall be to Me for a Son"?
(6) But when He again brings the firstborn into the world, He says: "Let all the angels of God worship Him."
(7) And on the one hand he says to the angels, "He who makes His angels spirits and His ministers flames of fire."
(8) But to the Son He says: "Your throne, O God, is forever and ever; a scepter of righteousness is the scepter of Your Kingdom.

OK, I admit I am pushing the comparison of a corvette to an angel, but both really fly! Both are very powerful and do the will of their master. The context of verse 7 shows that Jesus is far greater in power than even the angels (who are awesome flames of fire). Jesus could have called legions of angels to bring him down from the cross, but he didn't because his sacrifice needed to be made in order that righteousness could be enjoyed by all those who follow him. I just thought of something.... will there be corvette's in heaven? Probably not, we can just hitch a ride with an angel in case we have the desire for a little fire!
Email ThisBlogThis!Share to TwitterShare to FacebookShare to Pinterest
Newer Posts Older Posts Home
Subscribe to: Posts (Atom)