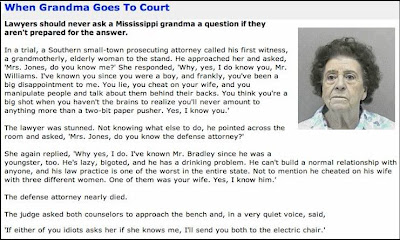 Over the past few years I have begun to enjoy the sitcom "The Golden Girls" more and more. To me the Sophia Petrillo (the grandmother) is the real star of the show. She just says what is on her mind in a way that is a bit TOO STRAIGHTFORWARD. Funny thing is; a lot of older people are like that! And when I read the story above, I was reminded of her. All this also brings out another truth, which is found in the Gospel of Luke.
Luke 12:1-9 (WEB)
1) Meanwhile, when a multitude of many thousands had gathered together, so much so that they trampled on each other, he began to tell his disciples first of all, “Beware of the yeast of the Pharisees, which is hypocrisy.
2) But there is nothing covered up, that will not be revealed, nor hidden, that will not be known.
3) Therefore whatever you have said in the darkness will be heard in the light. What you have spoken in the ear in the inner rooms will be proclaimed on the housetops.
4) “I tell you, my friends, don’t be afraid of those who kill the body, and after that have no more that they can do.
5) But I will warn you whom you should fear. Fear him, who after he has killed, has power to cast into Gehenna. Yes, I tell you, fear him.
6) “Aren’t five sparrows sold for two assaria coins? Not one of them is forgotten by God.
7) But the very hairs of your head are all numbered. Therefore don’t be afraid. You are of more value than many sparrows.
8) “I tell you, everyone who confesses me before men, him will the Son of Man also confess before the angels of God;
9) but he who denies me in the presence of men will be denied in the presence of the angels of God.
(Luke 12:1-9, WEB)

Society is changing. Years ago, there used to be a lot more interaction between neighbors, today the trend is to spend more and more time by yourself. BUT, you are never really alone; God is always there and HE knows more about you that any Grandma in court could ever know. Think about that the next time you even THINK OF DOING SOMETHING WRONG!!! And you thought the judge in the story was tough.....
Email ThisBlogThis!Share to TwitterShare to FacebookShare to Pinterest
Newer Posts Older Posts Home
Subscribe to: Posts (Atom)