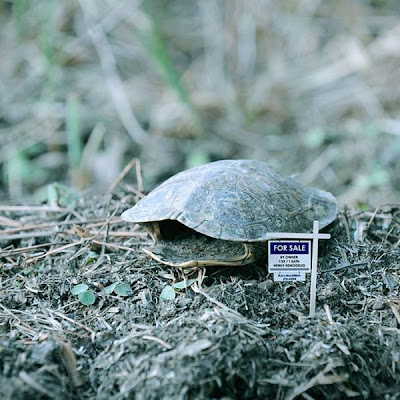 Today, millions of people have their homes "up for sale".  The economy is "down" and so are home values; in some places as much as 50%.  So, like many, many others, the owner of this "one bedroom, one bath" (according to the sign [you have to look VERY CAREFULLY TO SEE THAT!!!]) has moved out.  I wonder, where to?  For Christians, the answer is simple....

2 Corinthians, Chapter 5
1 For we know that if the earthly house of our tent is dissolved, we have a building from God, a house not made with hands, eternal, in the heavens. 2 For most certainly in this we groan, longing to be clothed with our habitation which is from heaven;  3 if so be that being clothed we will not be found naked.  4 For indeed we who are in this tent do groan, being burdened; not that we desire to be unclothed, but that we desire to be clothed, that what is mortal may be swallowed up by life.  5 Now he who made us for this very thing is God, who also gave to us the down payment of the Spirit.  6 Therefore, we are always confident and know that while we are at home in the body, we are absent from the Lord; 7 for we walk by faith, not by sight.  8 We are courageous, I say, and are willing rather to be absent from the body, and to be at home with the Lord.  9 Therefore also we make it our aim, whether at home or absent, to be well pleasing to him.  10 For we must all be revealed before the judgment seat of Christ; that each one may receive the things in the body, according to what he has done, whether good or bad.  11 Knowing therefore the fear of the Lord, we persuade men, but we are revealed to God; and I hope that we are revealed also in your consciences.

Heaven is the abode of those who have left this dwelling place.  Elementary; if we are not present within our bodies, then we are with The God of Heaven.  If you are reading this, then you still have work left to do.  There are many methods of reaching others with the truth of Spiritual things, but however you do it that message still needs to be shared.  Hurry, don't wait; today you may vacate this Earthly dwelling we call a body and go home!

Joh 16:1 "These things have I spoken to you, so that you wouldn't be caused to stumble.
Joh 16:2 They will put you out of the synagogues. Yes, the time comes that whoever kills you will think that he offers service to God.
Joh 16:3 They will do these things because they have not known the Father, nor me.
Joh 16:4 But I have told you these things, so that when the time comes, you may remember that I told you about them. I didn't tell you these things from the beginning, because I was with you.
Joh 16:5 But now I am going to him who sent me, and none of you asks me, 'Where are you going?'
Joh 16:6 But because I have told you these things, sorrow has filled your heart.
Joh 16:7 Nevertheless I tell you the truth: It is to your advantage that I go away, for if I don't go away, the Counselor won't come to you. But if I go, I will send him to you.
Joh 16:8 When he has come, he will convict the world about sin, about righteousness, and about judgment;
Joh 16:9 about sin, because they don't believe in me;
Joh 16:10 about righteousness, because I am going to my Father, and you won't see me any more;
Joh 16:11 about judgment, because the prince of this world has been judged.
Joh 16:12 "I have yet many things to tell you, but you can't bear them now.
Joh 16:13 However when he, the Spirit of truth, has come, he will guide you into all truth, for he will not speak from himself; but whatever he hears, he will speak. He will declare to you things that are coming.
Joh 16:14 He will glorify me, for he will take from what is mine, and will declare it to you.
Joh 16:15 All things whatever the Father has are mine; therefore I said that he takes of mine, and will declare it to you.
Joh 16:16 A little while, and you will not see me. Again a little while, and you will see me."
Joh 16:17 Some of his disciples therefore said to one another, "What is this that he says to us, 'A little while, and you won't see me, and again a little while, and you will see me;' and, 'Because I go to the Father?' "
Joh 16:18 They said therefore, "What is this that he says, 'A little while?' We don't know what he is saying."
Joh 16:19 Therefore Jesus perceived that they wanted to ask him, and he said to them, "Do you inquire among yourselves concerning this, that I said, 'A little while, and you won't see me, and again a little while, and you will see me?'
Joh 16:20 Most certainly I tell you, that you will weep and lament, but the world will rejoice. You will be sorrowful, but your sorrow will be turned into joy.
Joh 16:21 A woman, when she gives birth, has sorrow, because her time has come. But when she has delivered the child, she doesn't remember the anguish any more, for the joy that a human being is born into the world.
Joh 16:22 Therefore you now have sorrow, but I will see you again, and your heart will rejoice, and no one will take your joy away from you.
Joh 16:23 "In that day you will ask me no questions. Most certainly I tell you, whatever you may ask of the Father in my name, he will give it to you.
Joh 16:24 Until now, you have asked nothing in my name. Ask, and you will receive, that your joy may be made full.
Joh 16:25 I have spoken these things to you in figures of speech. But the time is coming when I will no more speak to you in figures of speech, but will tell you plainly about the Father.
Joh 16:26 In that day you will ask in my name; and I don't say to you, that I will pray to the Father for you,
Joh 16:27 for the Father himself loves you, because you have loved me, and have believed that I came forth from God.
Joh 16:28 I came out from the Father, and have come into the world. Again, I leave the world, and go to the Father."
Joh 16:29 His disciples said to him, "Behold, now you speak plainly, and speak no figures of speech.
Joh 16:30 Now we know that you know all things, and don't need for anyone to question you. By this we believe that you came forth from God."
Joh 16:31 Jesus answered them, "Do you now believe?
Joh 16:32 Behold, the time is coming, yes, and has now come, that you will be scattered, everyone to his own place, and you will leave me alone. Yet I am not alone, because the Father is with me.
Joh 16:33 I have told you these things, that in me you may have peace. In the world you have oppression; but cheer up! I have overcome the world."
Email ThisBlogThis!Share to TwitterShare to FacebookShare to Pinterest

"THE EPISTLE TO THE ROMANS" Introduction by Mark Copeland