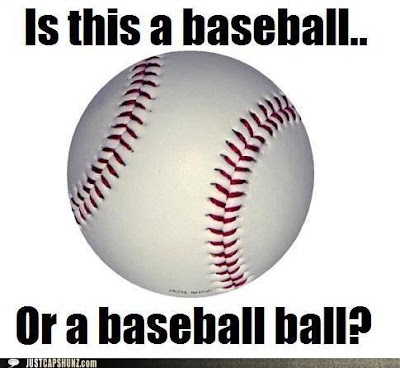 I have never heard of anyone referring to this as a baseball ball.  In a way, I suppose it is; but it is really necessary to be this wordy?  Its a baseball; so why add the other word?  I guess its someones idea of being cute or perhaps trying to be clever.  But, what about that certain someone for whom every word counts and everything that they say has a purpose.  I have known a FEW people like this and one I have read about comes to mind.  Here are a few of his statements...
WEB: John Chapter 4
[25] The woman said to him, “I know that Messiah comes,” (he who is called Christ). “When he has come, he will declare to us all things.”
[26] Jesus said to her, "“I am he, the one who speaks to you.”"
WEB: John 6:35. Jesus said to them, "“I am the bread of life. He who comes to me will not be hungry, and he who believes in me will never be thirsty.
WEB: John 8:12. Again, therefore, Jesus spoke to them, saying, "“I am the light of the world. He who follows me will not walk in the darkness, but will have the light of life.”"
WEB: John Chapter 8
[23] He said to them, "“You are from beneath. I am from above. You are of this world. I am not of this world. [24] I said therefore to you that you will die in your sins; for unless you believe that I am he, you will die in your sins.”"
WEB: John 8:58. Jesus said to them, "“Most certainly, I tell you, before Abraham came into existence, I AM.”"

WEB: John 9:5. While I am in the world, I am the light of the world.”"
WEB: John Chapter 10
[7] Jesus therefore said to them again, "“Most certainly, I tell you, I am the sheep’s door. [8] All who came before me are thieves and robbers, but the sheep didn’t listen to them. [9] I am the door. If anyone enters in by me, he will be saved, and will go in and go out, and will find pasture. [10] The thief only comes to steal, kill, and destroy. I came that they may have life, and may have it abundantly. [11] I am the good shepherd. The good shepherd lays down his life for the sheep.
WEB: John 11:25. Jesus said to her, "“I am the resurrection and the life. He who believes in me will still live, even if he dies.
I would like to be able to say I complete comprehend everything that Jesus has said; I can not do that.  But, in these verses the words he uses to refer to himself as "I am" mean I myself am in Greek.  He is pointing directly to himself (and only to himself) to show his uniqueness.  Its not philosophy Jesus is into, its his identity. He is not mincing words, he is just trying to teach.  Sometimes directness is the best way to do things.  So, I guess whoever made the picture at the top is really correct after all, but I somehow I just don't get it.  Jesus is a different matter!!!
Email ThisBlogThis!Share to TwitterShare to FacebookShare to Pinterest


Gen 3:1 Now the serpent was more subtle than any animal of the field which Yahweh God had made. He said to the woman, "Has God really said, 'You shall not eat of any tree of the garden?' "
Gen 3:2 The woman said to the serpent, "Of the fruit of the trees of the garden we may eat,
Gen 3:3 but of the fruit of the tree which is in the middle of the garden, God has said, 'You shall not eat of it, neither shall you touch it, lest you die.' "
Gen 3:4 The serpent said to the woman, "You won't surely die,
Gen 3:5 for God knows that in the day you eat it, your eyes will be opened, and you will be like God, knowing good and evil."
Gen 3:6 When the woman saw that the tree was good for food, and that it was a delight to the eyes, and that the tree was to be desired to make one wise, she took of its fruit, and ate; and she gave some to her husband with her, and he ate.
Gen 3:7 The eyes of both of them were opened, and they knew that they were naked. They sewed fig leaves together, and made themselves aprons.
Gen 3:8 They heard the voice of Yahweh God walking in the garden in the cool of the day, and the man and his wife hid themselves from the presence of Yahweh God among the trees of the garden.
Gen 3:9 Yahweh God called to the man, and said to him, "Where are you?"
Gen 3:10 The man said, "I heard your voice in the garden, and I was afraid, because I was naked; and I hid myself."
Gen 3:11 God said, "Who told you that you were naked? Have you eaten from the tree that I commanded you not to eat from?"
Gen 3:12 The man said, "The woman whom you gave to be with me, she gave me of the tree, and I ate."
Gen 3:13 Yahweh God said to the woman, "What is this you have done?" The woman said, "The serpent deceived me, and I ate."
Gen 3:14 Yahweh God said to the serpent, "Because you have done this, cursed are you above all livestock, and above every animal of the field. On your belly you shall go, and you shall eat dust all the days of your life.
Gen 3:15 I will put enmity between you and the woman, and between your offspring and her offspring. He will bruise your head, and you will bruise his heel."
Gen 3:16 To the woman he said, "I will greatly multiply your pain in childbirth. In pain you will bring forth children. Your desire will be for your husband, and he will rule over you."
Gen 3:17 To Adam he said, "Because you have listened to your wife's voice, and have eaten of the tree, of which I commanded you, saying, 'You shall not eat of it,' cursed is the ground for your sake. In toil you will eat of it all the days of your life.
Gen 3:18 Thorns also and thistles will it bring forth to you; and you will eat the herb of the field.
Gen 3:19 By the sweat of your face will you eat bread until you return to the ground, for out of it you were taken. For you are dust, and to dust you shall return."
Gen 3:20 The man called his wife Eve, because she was the mother of all living.
Gen 3:21 Yahweh God made coats of skins for Adam and for his wife, and clothed them.
Gen 3:22 Yahweh God said, "Behold, the man has become like one of us, knowing good and evil. Now, lest he put forth his hand, and also take of the tree of life, and eat, and live forever..."
Gen 3:23 Therefore Yahweh God sent him forth from the garden of Eden, to till the ground from which he was taken.
Gen 3:24 So he drove out the man; and he placed Cherubs at the east of the garden of Eden, and the flame of a sword which turned every way, to guard the way to the tree of life.
Email ThisBlogThis!Share to TwitterShare to FacebookShare to Pinterest


Mat 2:1 Now when Jesus was born in Bethlehem of Judea in the days of Herod the king, behold, wise men from the east came to Jerusalem, saying,
Mat 2:2 "Where is he who is born King of the Jews? For we saw his star in the east, and have come to worship him."
Mat 2:3 When Herod the king heard it, he was troubled, and all Jerusalem with him.
Mat 2:4 Gathering together all the chief priests and scribes of the people, he asked them where the Christ would be born.
Mat 2:5 They said to him, "In Bethlehem of Judea, for thus it is written through the prophet,
Mat 2:6 'You Bethlehem, land of Judah, are in no way least among the princes of Judah: for out of you shall come forth a governor, who shall shepherd my people, Israel.' "
Mat 2:7 Then Herod secretly called the wise men, and learned from them exactly what time the star appeared.
Mat 2:8 He sent them to Bethlehem, and said, "Go and search diligently for the young child. When you have found him, bring me word, so that I also may come and worship him."
Mat 2:9 They, having heard the king, went their way; and behold, the star, which they saw in the east, went before them, until it came and stood over where the young child was.
Mat 2:10 When they saw the star, they rejoiced with exceedingly great joy.
Mat 2:11 They came into the house and saw the young child with Mary, his mother, and they fell down and worshiped him. Opening their treasures, they offered to him gifts: gold, frankincense, and myrrh.
Mat 2:12 Being warned in a dream that they shouldn't return to Herod, they went back to their own country another way.
Mat 2:13 Now when they had departed, behold, an angel of the Lord appeared to Joseph in a dream, saying, "Arise and take the young child and his mother, and flee into Egypt, and stay there until I tell you, for Herod will seek the young child to destroy him."
Mat 2:14 He arose and took the young child and his mother by night, and departed into Egypt,
Mat 2:15 and was there until the death of Herod; that it might be fulfilled which was spoken by the Lord through the prophet, saying, "Out of Egypt I called my son."
Mat 2:16 Then Herod, when he saw that he was mocked by the wise men, was exceedingly angry, and sent out, and killed all the male children who were in Bethlehem and in all the surrounding countryside, from two years old and under, according to the exact time which he had learned from the wise men.
Mat 2:17 Then that which was spoken by Jeremiah the prophet was fulfilled, saying,
Mat 2:18 "A voice was heard in Ramah, lamentation, weeping and great mourning, Rachel weeping for her children; she wouldn't be comforted, because they are no more."
Mat 2:19 But when Herod was dead, behold, an angel of the Lord appeared in a dream to Joseph in Egypt, saying,
Mat 2:20 "Arise and take the young child and his mother, and go into the land of Israel, for those who sought the young child's life are dead."
Mat 2:21 He arose and took the young child and his mother, and came into the land of Israel.
Mat 2:22 But when he heard that Archelaus was reigning over Judea in the place of his father, Herod, he was afraid to go there. Being warned in a dream, he withdrew into the region of Galilee,
Mat 2:23 and came and lived in a city called Nazareth; that it might be fulfilled which was spoken through the prophets: "He will be called a Nazarene."

What hinders me from being baptized by Mark Copeland