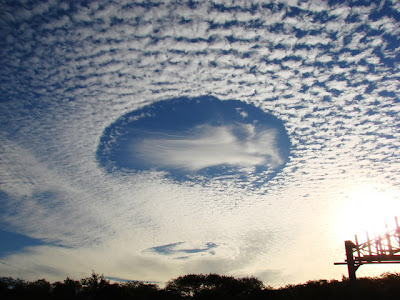 Look, the sky has a hole in it!!!  Maybe its a pathway to heaven; maybe not, but whatever it is, its an uncommon sight to be sure!!!  Why think about heaven?  Well, why not?  There has to be something better than this world.  And the ways things have been going this world just seems to be getting worse and worse.  Ask yourself, how many wars, how many economic downturns, how much political intrigue and corruption can there be?  Sooner or later, western civilization as we know it seems doomed.  There is in fact something better, something awaiting us that will be truly magnificent.  And this is how I know...
WEB: John Chapter 14

[1] "“Don’t let your heart be troubled. Believe in God. Believe also in me. [2] In my Father’s house are many homes. If it weren’t so, I would have told you. I am going to prepare a place for you. [3] If I go and prepare a place for you, I will come again, and will receive you to myself; that where I am, you may be there also. [4] Where I go, you know, and you know the way.”"

[6] Jesus said to him, "“I am the way, the truth, and the life. No one comes to the Father, except through me.
The way to heaven isn't through some hole in the sky, its through Jesus.  Recently, its become fashionable to bash Christianity, to degrade and attempt to restrict the influence of Jesus of Nazareth.  Stupidity, because why would someone want to malign someone who has done something wonderful for you?  Jesus has shown us the way to paradise and whoever is foolish enough to ignore it will really be missing out on something very special.  But, people will always do things that aren't good for them and I sincerely hope that you do not fall into that category.  Until the time comes for my entry into heaven, I will keep looking up at the sky and wonder what is really beyond that hole, but whatever it is I know it will be HOLY, because Jesus is there and that is where I want to be.  How about you???
Email ThisBlogThis!Share to TwitterShare to FacebookShare to Pinterest

Aug. 7, 8
Acts 22
Act 22:1 "Brothers and fathers, listen to the defense which I now make to you."
Act 22:2 When they heard that he spoke to them in the Hebrew language, they were even more quiet. He said,
Act 22:3 "I am indeed a Jew, born in Tarsus of Cilicia, but brought up in this city at the feet of Gamaliel, instructed according to the strict manner of the law of our fathers, being zealous for God, even as you all are this day.
Act 22:4 I persecuted this Way to the death, binding and delivering into prisons both men and women.
Act 22:5 As also the high priest and all the council of the elders testify, from whom also I received letters to the brothers, and traveled to Damascus to bring them also who were there to Jerusalem in bonds to be punished.
Act 22:6 It happened that, as I made my journey, and came close to Damascus, about noon, suddenly there shone from the sky a great light around me.
Act 22:7 I fell to the ground, and heard a voice saying to me, 'Saul, Saul, why are you persecuting me?'
Act 22:8 I answered, 'Who are you, Lord?' He said to me, 'I am Jesus of Nazareth, whom you persecute.'
Act 22:9 "Those who were with me indeed saw the light and were afraid, but they didn't understand the voice of him who spoke to me.
Act 22:10 I said, 'What shall I do, Lord?' The Lord said to me, 'Arise, and go into Damascus. There you will be told about all things which are appointed for you to do.'
Act 22:11 When I couldn't see for the glory of that light, being led by the hand of those who were with me, I came into Damascus.
Act 22:12 One Ananias, a devout man according to the law, well reported of by all the Jews who lived in Damascus,
Act 22:13 came to me, and standing by me said to me, 'Brother Saul, receive your sight!' In that very hour I looked up at him.
Act 22:14 He said, 'The God of our fathers has appointed you to know his will, and to see the Righteous One, and to hear a voice from his mouth.
Act 22:15 For you will be a witness for him to all men of what you have seen and heard.
Act 22:16 Now why do you wait? Arise, be baptized, and wash away your sins, calling on the name of the Lord.'
Act 22:17 "It happened that, when I had returned to Jerusalem, and while I prayed in the temple, I fell into a trance,
Act 22:18 and saw him saying to me, 'Hurry and get out of Jerusalem quickly, because they will not receive testimony concerning me from you.'
Act 22:19 I said, 'Lord, they themselves know that I imprisoned and beat in every synagogue those who believed in you.
Act 22:20 When the blood of Stephen, your witness, was shed, I also was standing by, and consenting to his death, and guarding the cloaks of those who killed him.'
Act 22:21 "He said to me, 'Depart, for I will send you out far from here to the Gentiles.' "
Act 22:22 They listened to him until he said that; then they lifted up their voice, and said, "Rid the earth of this fellow, for he isn't fit to live!"
Act 22:23 As they cried out, and threw off their cloaks, and threw dust into the air,
Act 22:24 the commanding officer commanded him to be brought into the barracks, ordering him to be examined by scourging, that he might know for what crime they shouted against him like that.
Act 22:25 When they had tied him up with thongs, Paul asked the centurion who stood by, "Is it lawful for you to scourge a man who is a Roman, and not found guilty?"
Act 22:26 When the centurion heard it, he went to the commanding officer and told him, "Watch what you are about to do, for this man is a Roman!"
Act 22:27 The commanding officer came and asked him, "Tell me, are you a Roman?" He said, "Yes."
Act 22:28 The commanding officer answered, "I bought my citizenship for a great price." Paul said, "But I was born a Roman."
Act 22:29 Immediately those who were about to examine him departed from him, and the commanding officer also was afraid when he realized that he was a Roman, because he had bound him.
Act 22:30 But on the next day, desiring to know the truth about why he was accused by the Jews, he freed him from the bonds, and commanded the chief priests and all the council to come together, and brought Paul down and set him before them.
Email ThisBlogThis!Share to TwitterShare to FacebookShare to Pinterest
Newer Posts Older Posts Home
Subscribe to: Posts (Atom)