Pancakes in a new way 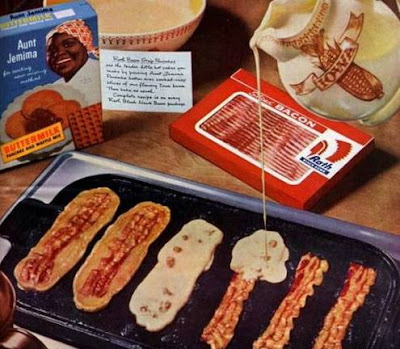 Its an odd thing the way the human mind operates. Yesterday was my day off, but I was busy with a computer problem most of it. I had a number of errands to do, supper, and spending some time with my wife watching the Netflix movie, "The Blind Side" (which by the way, is a pretty good flick). By the time 11p.m. rolled around I was so tired that I went to bed (which is unusual for me, to say the least). But, around 2:30 a.m. or so, I woke up needing a glass of water. Funny, but all I could think about was pancakes. Sadly enough, we didn't have any mix in the house, so I gave up and proceeded to check my e-mail and do a blog post. Wouldn't you know it, I found this picture! It intrigued me, because I never thought of putting the pancakes over the bacon. Then, I noticed the pancake box and thought of a Bible passage from the book of Job.

Job 42:12-17 (WEB)
12) So Yahweh blessed the latter end of Job more than his beginning. He had fourteen thousand sheep, six thousand camels, one thousand yoke of oxen, and a thousand female donkeys.
13) He had also seven sons and three daughters.
14) He called the name of the first, Jemimah; and the name of the second, Keziah; and the name of the third, Keren Happuch.
15) In all the land were no women found so beautiful as the daughters of Job. Their father gave them an inheritance among their brothers.
16) After this Job lived one hundred forty years, and saw his sons, and his sons’ sons, to four generations.
17) So Job died, being old and full of days.

Job is one of the most important figures in the Bible, for his problem of suffering is one to which we all can relate. Suffering is difficult for us all, but how do you handle it when you feel you have done nothing wrong? The book is full of many "explanations" by Job's "friends", but in the end God gives the answer. Basically, things happen in the life of those try to follow God faithfully because God has a plan for them. Job needed to realize he didn't know everything and to humble himself and pray for others, and so do we. Today, I really didn't like waking up so early in the morning, but if it causes me in some way to think about the scriptures, Wow, what a blessing!! Somehow I can relate a little more to Job and his situation. Besides, I learned to make pancakes in a new way and I can't wait to go to the store for some pancake batter and bacon. Even waking up early can be a good thing!
Email ThisBlogThis!Share to TwitterShare to FacebookShare to Pinterest
Newer Posts Older Posts Home
Subscribe to: Posts (Atom)