The explanation for the "impossible" 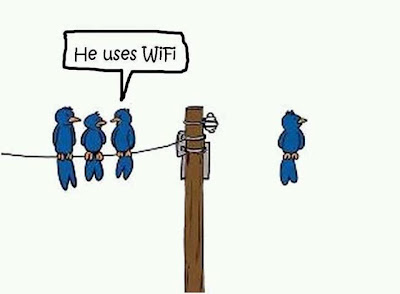 Just when you think you have life figured out; along comes something new that baffles you. Thirty years ago, this little cartoon would have made absolutely no sense, but now, its easy to understand (although a bit dumb).  Still, as human beings, we don't know everything and are learning as things change on almost a daily basis.  This is true now and it was in the distant past.  And so we come to a rich man's encounter with Jesus...

Matthew, Chapter 19
16 Behold, one came to him and said, “Good teacher, what good thing shall I do, that I may have eternal life?”  17 He said to him, "“Why do you call me good? No one is good but one, that is, God. But if you want to enter into life, keep the commandments.”"

20 The young man said to him, “All these things I have observed from my youth. What do I still lack?”

21 Jesus said to him, "“If you want to be perfect, go, sell what you have, and give to the poor, and you will have treasure in heaven; and come, follow me.”"  22 But when the young man heard the saying, he went away sad, for he was one who had great possessions.  23 Jesus said to his disciples, "“Most certainly I say to you, a rich man will enter into the Kingdom of Heaven with difficulty.  24 Again I tell you, it is easier for a camel to go through a needle’s eye, than for a rich man to enter into the Kingdom of God.”"

25 When the disciples heard it, they were exceedingly astonished, saying, “Who then can be saved?”

26 Looking at them, Jesus said, "“With men this is impossible, but with God all things are possible.”"

We all like to have nice things and nice things require money, so its natural to want to hold onto what we have and even acquire more.  Jesus' disciples knew this as they ask the question of verse 25 and gives them an expected answer: Look to God for the answer.  Having money is a good thing, but when it overpowers ones desire to please God; its time for a change.  A change from an emphasis on "THINGS" ,to putting the spiritual things of God first.  This may seem impossible because we all need a lifeline (like the birds in the cartoon), but with God as our lifeline, EVERYTHING IS POSSIBLE!!!!  Have faith, trust in God and let HIM do the seemingly impossible for you!!!

Act 20:1 After the uproar had ceased, Paul sent for the disciples, took leave of them, and departed to go into Macedonia.
Act 20:2 When he had gone through those parts, and had encouraged them with many words, he came into Greece.
Act 20:3 When he had spent three months there, and a plot was made against him by Jews as he was about to set sail for Syria, he determined to return through Macedonia.
Act 20:4 These accompanied him as far as Asia: Sopater of Beroea; Aristarchus and Secundus of the Thessalonians; Gaius of Derbe; Timothy; and Tychicus and Trophimus of Asia.
Act 20:5 But these had gone ahead, and were waiting for us at Troas.
Act 20:6 We sailed away from Philippi after the days of Unleavened Bread, and came to them at Troas in five days, where we stayed seven days.
Act 20:7 On the first day of the week, when the disciples were gathered together to break bread, Paul talked with them, intending to depart on the next day, and continued his speech until midnight.
Act 20:8 There were many lights in the upper chamber where we were gathered together.
Act 20:9 A certain young man named Eutychus sat in the window, weighed down with deep sleep. As Paul spoke still longer, being weighed down by his sleep, he fell down from the third story, and was taken up dead.
Act 20:10 Paul went down, and fell upon him, and embracing him said, "Don't be troubled, for his life is in him."
Act 20:11 When he had gone up, and had broken bread, and eaten, and had talked with them a long while, even until break of day, he departed.
Act 20:12 They brought the boy in alive, and were greatly comforted.
Act 20:13 But we who went ahead to the ship set sail for Assos, intending to take Paul aboard there, for he had so arranged, intending himself to go by land.
Act 20:14 When he met us at Assos, we took him aboard, and came to Mitylene.
Act 20:15 Sailing from there, we came the following day opposite Chios. The next day we touched at Samos and stayed at Trogyllium, and the day after we came to Miletus.
Act 20:16 For Paul had determined to sail past Ephesus, that he might not have to spend time in Asia; for he was hastening, if it were possible for him, to be in Jerusalem on the day of Pentecost.
Act 20:17 From Miletus he sent to Ephesus, and called to himself the elders of the assembly.
Act 20:18 When they had come to him, he said to them, "You yourselves know, from the first day that I set foot in Asia, how I was with you all the time,
Act 20:19 serving the Lord with all humility, with many tears, and with trials which happened to me by the plots of the Jews;
Act 20:20 how I didn't shrink from declaring to you anything that was profitable, teaching you publicly and from house to house,
Act 20:21 testifying both to Jews and to Greeks repentance toward God, and faith toward our Lord Jesus.
Act 20:22 Now, behold, I go bound by the Spirit to Jerusalem, not knowing what will happen to me there;
Act 20:23 except that the Holy Spirit testifies in every city, saying that bonds and afflictions wait for me.
Act 20:24 But these things don't count; nor do I hold my life dear to myself, so that I may finish my race with joy, and the ministry which I received from the Lord Jesus, to fully testify to the Good News of the grace of God.
Act 20:25 "Now, behold, I know that you all, among whom I went about preaching the Kingdom of God, will see my face no more.
Act 20:26 Therefore I testify to you this day that I am clean from the blood of all men,
Act 20:27 for I didn't shrink from declaring to you the whole counsel of God.
Act 20:28 Take heed, therefore, to yourselves, and to all the flock, in which the Holy Spirit has made you overseers, to shepherd the assembly of the Lord and God which he purchased with his own blood.
Act 20:29 For I know that after my departure, vicious wolves will enter in among you, not sparing the flock.
Act 20:30 Men will arise from among your own selves, speaking perverse things, to draw away the disciples after them.
Act 20:31 Therefore watch, remembering that for a period of three years I didn't cease to admonish everyone night and day with tears.
Act 20:32 Now, brothers, I entrust you to God, and to the word of his grace, which is able to build up, and to give you the inheritance among all those who are sanctified.
Act 20:33 I coveted no one's silver, or gold, or clothing.
Act 20:34 You yourselves know that these hands served my necessities, and those who were with me.
Act 20:35 In all things I gave you an example, that so laboring you ought to help the weak, and to remember the words of the Lord Jesus, that he himself said, 'It is more blessed to give than to receive.' "
Act 20:36 When he had spoken these things, he knelt down and prayed with them all.
Act 20:37 They all wept a lot, and fell on Paul's neck and kissed him,
Act 20:38 sorrowing most of all because of the word which he had spoken, that they should see his face no more. And they accompanied him to the ship.
Email ThisBlogThis!Share to TwitterShare to FacebookShare to Pinterest

"THE EPISTLE TO THE GALATIANS" Chapter One by Mark Copeland