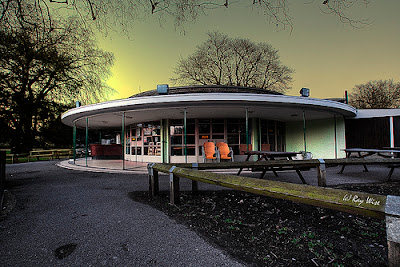 Imagine living in a round house...  Curved walls, furniture with curves to match (or square furniture that just not seem to match), and a curved kitchen.  I suppose that there are those who would feel comfortable living in a round world, but for me, it would be very difficult.  Just trying to think of things differently would be a challenge.  Imagine then, how the religious leaders of Jesus' day must have thought of him...
Matthew 12:10-14 (WEB)
10) And behold there was a man with a withered hand. They asked him, “Is it lawful to heal on the Sabbath day?” that they might accuse him.
11) He said to them, “What man is there among you, who has one sheep, and if this one falls into a pit on the Sabbath day, won’t he grab on to it, and lift it out?
12) Of how much more value then is a man than a sheep! Therefore it is lawful to do good on the Sabbath day.”
13) Then he told the man, “Stretch out your hand.” He stretched it out; and it was restored whole, just like the other.
14) But the Pharisees went out, and conspired against him, how they might destroy him.


For a Jew, the LAW was the embodiment of religion.  They even had rules that protected their rules.  And here comes Jesus, who goes beyond their rules to see the correctness of actions based on goodness.  It was just too much for them and they reacted with evil.  They were like a square piece of furniture in a round house; they just didn't fit.  The next time someone challenges what you believe, think with your heart as well as your head and do the right thing.
Email ThisBlogThis!Share to TwitterShare to FacebookShare to Pinterest


1Sa 19:1 Saul spoke to Jonathan his son, and to all his servants, that they should kill David. But Jonathan, Saul's son, delighted much in David.
1Sa 19:2 Jonathan told David, saying, Saul my father seeks to kill you: now therefore, please take care of yourself in the morning, and live in a secret place, and hide yourself:
1Sa 19:3 and I will go out and stand beside my father in the field where you are, and I will talk with my father about you; and if I see anything, I will tell you.
1Sa 19:4 Jonathan spoke good of David to Saul his father, and said to him, Don't let the king sin against his servant, against David; because he has not sinned against you, and because his works have been very good toward you:
1Sa 19:5 for he put his life in his hand, and struck the Philistine, and Yahweh worked a great victory for all Israel: you saw it, and rejoiced; why then will you sin against innocent blood, to kill David without a cause?
1Sa 19:6 Saul listened to the voice of Jonathan: and Saul swore, As Yahweh lives, he shall not be put to death.
1Sa 19:7 Jonathan called David, and Jonathan showed him all those things. Jonathan brought David to Saul, and he was in his presence, as before.
1Sa 19:8 There was war again: and David went out, and fought with the Philistines, and killed them with a great slaughter; and they fled before him.
1Sa 19:9 An evil spirit from Yahweh was on Saul, as he sat in his house with his spear in his hand; and David was playing with his hand.
1Sa 19:10 Saul sought to strike David even to the wall with the spear; but he slipped away out of Saul's presence, and he struck the spear into the wall: and David fled, and escaped that night.
1Sa 19:11 Saul sent messengers to David's house, to watch him, and to kill him in the morning: and Michal, David's wife, told him, saying, If you don't save your life tonight, tomorrow you will be slain.
1Sa 19:12 So Michal let David down through the window: and he went, and fled, and escaped.
1Sa 19:13 Michal took the teraphim, and laid it in the bed, and put a pillow of goats' hair at its head, and covered it with the clothes.
1Sa 19:14 When Saul sent messengers to take David, she said, He is sick.
1Sa 19:15 Saul sent the messengers to see David, saying, Bring him up to me in the bed, that I may kill him.
1Sa 19:16 When the messengers came in, behold, the teraphim was in the bed, with the pillow of goats' hair at its head.
1Sa 19:17 Saul said to Michal, Why have you deceived me thus, and let my enemy go, so that he is escaped? Michal answered Saul, He said to me, Let me go; why should I kill you?
1Sa 19:18 Now David fled, and escaped, and came to Samuel to Ramah, and told him all that Saul had done to him. He and Samuel went and lived in Naioth.
1Sa 19:19 It was told Saul, saying, Behold, David is at Naioth in Ramah.
1Sa 19:20 Saul sent messengers to take David: and when they saw the company of the prophets prophesying, and Samuel standing as head over them, the Spirit of God came on the messengers of Saul, and they also prophesied.
1Sa 19:21 When it was told Saul, he sent other messengers, and they also prophesied. Saul sent messengers again the third time, and they also prophesied.
1Sa 19:22 Then went he also to Ramah, and came to the great well that is in Secu: and he asked and said, Where are Samuel and David? One said, Behold, they are at Naioth in Ramah.
1Sa 19:23 He went there to Naioth in Ramah: and the Spirit of God came on him also, and he went on, and prophesied, until he came to Naioth in Ramah.
1Sa 19:24 He also stripped off his clothes, and he also prophesied before Samuel, and lay down naked all that day and all that night. Therefore they say, "Is Saul also among the prophets?"

Jun. 13, 14
John 15
Joh 15:1 "I am the true vine, and my Father is the farmer.
Joh 15:2 Every branch in me that doesn't bear fruit, he takes away. Every branch that bears fruit, he prunes, that it may bear more fruit.
Joh 15:3 You are already pruned clean because of the word which I have spoken to you.
Joh 15:4 Remain in me, and I in you. As the branch can't bear fruit by itself, unless it remains in the vine, so neither can you, unless you remain in me.
Joh 15:5 I am the vine. You are the branches. He who remains in me, and I in him, the same bears much fruit, for apart from me you can do nothing.
Joh 15:6 If a man doesn't remain in me, he is thrown out as a branch, and is withered; and they gather them, throw them into the fire, and they are burned.
Joh 15:7 If you remain in me, and my words remain in you, you will ask whatever you desire, and it will be done for you.
Joh 15:8 "In this is my Father glorified, that you bear much fruit; and so you will be my disciples.
Joh 15:9 Even as the Father has loved me, I also have loved you. Remain in my love.
Joh 15:10 If you keep my commandments, you will remain in my love; even as I have kept my Father's commandments, and remain in his love.
Joh 15:11 I have spoken these things to you, that my joy may remain in you, and that your joy may be made full.
Joh 15:12 "This is my commandment, that you love one another, even as I have loved you.
Joh 15:13 Greater love has no one than this, that someone lay down his life for his friends.
Joh 15:14 You are my friends, if you do whatever I command you.
Joh 15:15 No longer do I call you servants, for the servant doesn't know what his lord does. But I have called you friends, for everything that I heard from my Father, I have made known to you.
Joh 15:16 You didn't choose me, but I chose you, and appointed you, that you should go and bear fruit, and that your fruit should remain; that whatever you will ask of the Father in my name, he may give it to you.
Joh 15:17 "I command these things to you, that you may love one another.
Joh 15:18 If the world hates you, you know that it has hated me before it hated you.
Joh 15:19 If you were of the world, the world would love its own. But because you are not of the world, since I chose you out of the world, therefore the world hates you.
Joh 15:20 Remember the word that I said to you: 'A servant is not greater than his lord.' If they persecuted me, they will also persecute you. If they kept my word, they will keep yours also.
Joh 15:21 But all these things will they do to you for my name's sake, because they don't know him who sent me.
Joh 15:22 If I had not come and spoken to them, they would not have had sin; but now they have no excuse for their sin.
Joh 15:23 He who hates me, hates my Father also.
Joh 15:24 If I hadn't done among them the works which no one else did, they wouldn't have had sin. But now have they seen and also hated both me and my Father.
Joh 15:25 But this happened so that the word may be fulfilled which was written in their law, 'They hated me without a cause.'
Joh 15:26 "When the Counselor has come, whom I will send to you from the Father, the Spirit of truth, who proceeds from the Father, he will testify about me.
Joh 15:27 You will also testify, because you have been with me from the beginning.
Email ThisBlogThis!Share to TwitterShare to FacebookShare to Pinterest
Newer Posts Older Posts Home
Subscribe to: Posts (Atom)