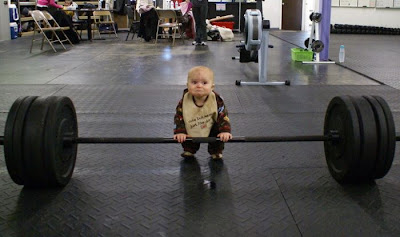 I think I like this youngster! Somebody probably put him up to doing this, but what if he did it himself??? Now that would be something indeed!! Not that I think he could actually lift something like this, but if he would try... WOW!!! Optimism, it is the outward expression of hope! With it, anything seems possible, without it, all seems lost. Its all in your thinking. One of my favorite passages of Scripture talks about this...
Philippians 4:8-13 (WEB)
8) Finally, brothers, whatever things are true, whatever things are honorable, whatever things are just, whatever things are pure, whatever things are lovely, whatever things are of good report; if there is any virtue, and if there is any praise, think about these things.
9) The things which you learned, received, heard, and saw in me: do these things, and the God of peace will be with you.
10) But I rejoice in the Lord greatly, that now at length you have revived your thought for me; in which you did indeed take thought, but you lacked opportunity.
11) Not that I speak in respect to lack, for I have learned in whatever state I am, to be content in it.
12) I know how to be humbled, and I know also how to abound. In everything and in all things I have learned the secret both to be filled and to be hungry, both to abound and to be in need.
13) I can do all things through Christ, who strengthens me.
(Philippians 4:8-13, WEB)

Paul was a little man who had very poor eyesight, but had a seemingly boundless faith and optimism. He did things that even the original apostles of Christ did not do and did them to such an extent that he far outshines them ALL!!! How, what made him different? Well, I never met the man, so, I REALLY DON'T KNOW, BUT, let me take a guess. I think the answer is found in verse 8. The human mind is like that of a computer (in some ways at least) in that what you put in yields what you get out (computer geeks often say"garbage in, garbage out"). But, its true, for over a period of time, you become what you think about day by day. So, if you reread verse 8 and really put it to mind... who knows, EVEN YOU MIGHT DO THE SEEMINGLY IMPOSSIBLE!!!

By the way, I was thinking about this a lot today because we just found out that our oldest daughter is expecting in January. Forty two years young and having a BABY! This will make grand-baby number nine. And I thought it would never happen again; anything, but anything is possible!!!!
Email ThisBlogThis!Share to TwitterShare to FacebookShare to Pinterest
Newer Posts Older Posts Home
Subscribe to: Posts (Atom)