Stupidity: The sorry stepchild of invention. 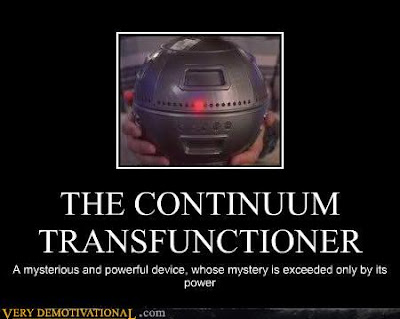 Sounds like something similar to a warp field generator or perhaps a multi-phase transponder for a quadratic field inducer, doesn't it?  Believe that and I'll tell you about the multi-dimensional transverse gravitonometer and the flux capacitor.  Whoops, you probably already know about the flux capacitor.  Then again, reality comes back and I am forced to actually make sense.  Human beings have the capacity to rearrange their environment; create new inventions, postulate ideas to conceived problems.  We are too smart for our own good!  Think of just one area: food.  Look at all the additives, preservatives and "extra" things we do with our sustenance!  The result is a whole host of man-made diseases.  Yet, how futile this all is...
WEB: Ecclesiastes 9:10. Whatever your hand finds to do, do it with your might; for there is no work, nor device, nor knowledge, nor wisdom, in Sheol, where you are going.
Solomon was the wisest man that ever lived!  But, for all his wisdom he was seduced by his "strange wives" to follow after other gods.  But, he was right in this verse because we should try with our utmost to do all that we can do in this world.  Solomon was limited in his knowledge of the afterlife, because there will be more for us in heaven than he could have possibly imagined.  I know from the New Testament that we will have a "work" to do in heaven; namely praising God, but I wonder... will there be a flux capacitor there?  Will have to ask at the gate...
Email ThisBlogThis!Share to TwitterShare to FacebookShare to Pinterest

Feb. 4
Genesis 35
Gen 35:1 God said to Jacob, "Arise, go up to Bethel, and live there. Make there an altar to God, who appeared to you when you fled from the face of Esau your brother."
Gen 35:2 Then Jacob said to his household, and to all who were with him, "Put away the foreign gods that are among you, purify yourselves, change your garments.
Gen 35:3 Let us arise, and go up to Bethel. I will make there an altar to God, who answered me in the day of my distress, and was with me in the way which I went."
Gen 35:4 They gave to Jacob all the foreign gods which were in their hands, and the rings which were in their ears; and Jacob hid them under the oak which was by Shechem.
Gen 35:5 They traveled, and a terror of God was on the cities that were around them, and they didn't pursue the sons of Jacob.
Gen 35:6 So Jacob came to Luz (that is, Bethel), which is in the land of Canaan, he and all the people who were with him.
Gen 35:7 He built an altar there, and called the place El Beth El; because there God was revealed to him, when he fled from the face of his brother.
Gen 35:8 Deborah, Rebekah's nurse, died, and she was buried below Bethel under the oak; and its name was called Allon Bacuth.
Gen 35:9 God appeared to Jacob again, when he came from Paddan Aram, and blessed him.
Gen 35:10 God said to him, "Your name is Jacob. Your name shall not be Jacob any more, but your name will be Israel." He named him Israel.
Gen 35:11 God said to him, "I am God Almighty. Be fruitful and multiply. A nation and a company of nations will be from you, and kings will come out of your body.
Gen 35:12 The land which I gave to Abraham and Isaac, I will give it to you, and to your seed after you will I give the land."
Gen 35:13 God went up from him in the place where he spoke with him.
Gen 35:14 Jacob set up a pillar in the place where he spoke with him, a pillar of stone. He poured out a drink offering on it, and poured oil on it.
Gen 35:15 Jacob called the name of the place where God spoke with him "Bethel."
Gen 35:16 They traveled from Bethel. There was still some distance to come to Ephrath, and Rachel travailed. She had hard labor.
Gen 35:17 When she was in hard labor, the midwife said to her, "Don't be afraid, for now you will have another son."
Gen 35:18 It happened, as her soul was departing (for she died), that she named him Benoni, but his father named him Benjamin.
Gen 35:19 Rachel died, and was buried in the way to Ephrath (the same is Bethlehem).
Gen 35:20 Jacob set up a pillar on her grave. The same is the Pillar of Rachel's grave to this day.
Gen 35:21 Israel traveled, and spread his tent beyond the tower of Eder.
Gen 35:22 It happened, while Israel lived in that land, that Reuben went and lay with Bilhah, his father's concubine, and Israel heard of it. Now the sons of Jacob were twelve.
Gen 35:23 The sons of Leah: Reuben (Jacob's firstborn), Simeon, Levi, Judah, Issachar, and Zebulun.
Gen 35:24 The sons of Rachel: Joseph and Benjamin.
Gen 35:25 The sons of Bilhah (Rachel's handmaid): Dan and Naphtali.
Gen 35:26 The sons of Zilpah (Leah's handmaid): Gad and Asher. These are the sons of Jacob, who were born to him in Paddan Aram.
Gen 35:27 Jacob came to Isaac his father, to Mamre, to Kiriath Arba (which is Hebron), where Abraham and Isaac lived as foreigners.
Gen 35:28 The days of Isaac were one hundred eighty years.
Gen 35:29 Isaac gave up the spirit, and died, and was gathered to his people, old and full of days. Esau and Jacob, his sons, buried him.
Email ThisBlogThis!Share to TwitterShare to FacebookShare to Pinterest


Mat 18:1 In that hour the disciples came to Jesus, saying, "Who then is greatest in the Kingdom of Heaven?"
Mat 18:2 Jesus called a little child to himself, and set him in the midst of them,
Mat 18:3 and said, "Most certainly I tell you, unless you turn, and become as little children, you will in no way enter into the Kingdom of Heaven.
Mat 18:4 Whoever therefore humbles himself as this little child, the same is the greatest in the Kingdom of Heaven.
Mat 18:5 Whoever receives one such little child in my name receives me,
Mat 18:6 but whoever causes one of these little ones who believe in me to stumble, it would be better for him that a huge millstone should be hung around his neck, and that he should be sunk in the depths of the sea.
Mat 18:7 "Woe to the world because of occasions of stumbling! For it must be that the occasions come, but woe to that person through whom the occasion comes!
Mat 18:8 If your hand or your foot causes you to stumble, cut it off, and cast it from you. It is better for you to enter into life maimed or crippled, rather than having two hands or two feet to be cast into the eternal fire.
Mat 18:9 If your eye causes you to stumble, pluck it out, and cast it from you. It is better for you to enter into life with one eye, rather than having two eyes to be cast into the Gehenna of fire.
Mat 18:10 See that you don't despise one of these little ones, for I tell you that in heaven their angels always see the face of my Father who is in heaven.
Mat 18:11 For the Son of Man came to save that which was lost.
Mat 18:12 "What do you think? If a man has one hundred sheep, and one of them goes astray, doesn't he leave the ninety-nine, go to the mountains, and seek that which has gone astray?
Mat 18:13 If he finds it, most certainly I tell you, he rejoices over it more than over the ninety-nine which have not gone astray.
Mat 18:14 Even so it is not the will of your Father who is in heaven that one of these little ones should perish.
Mat 18:15 "If your brother sins against you, go, show him his fault between you and him alone. If he listens to you, you have gained back your brother.
Mat 18:16 But if he doesn't listen, take one or two more with you, that at the mouth of two or three witnesses every word may be established.
Mat 18:17 If he refuses to listen to them, tell it to the assembly. If he refuses to hear the assembly also, let him be to you as a Gentile or a tax collector.
Mat 18:18 Most certainly I tell you, whatever things you bind on earth will have been bound in heaven, and whatever things you release on earth will have been released in heaven.
Mat 18:19 Again, assuredly I tell you, that if two of you will agree on earth concerning anything that they will ask, it will be done for them by my Father who is in heaven.
Mat 18:20 For where two or three are gathered together in my name, there I am in the midst of them."
Mat 18:21 Then Peter came and said to him, "Lord, how often shall my brother sin against me, and I forgive him? Until seven times?"
Mat 18:22 Jesus said to him, "I don't tell you until seven times, but, until seventy times seven.
Mat 18:23 Therefore the Kingdom of Heaven is like a certain king, who wanted to reconcile accounts with his servants.
Mat 18:24 When he had begun to reconcile, one was brought to him who owed him ten thousand talents.
Mat 18:25 But because he couldn't pay, his lord commanded him to be sold, with his wife, his children, and all that he had, and payment to be made.
Mat 18:26 The servant therefore fell down and kneeled before him, saying, 'Lord, have patience with me, and I will repay you all!'
Mat 18:27 The lord of that servant, being moved with compassion, released him, and forgave him the debt.
Mat 18:28 "But that servant went out, and found one of his fellow servants, who owed him one hundred denarii, and he grabbed him, and took him by the throat, saying, 'Pay me what you owe!'
Mat 18:29 "So his fellow servant fell down at his feet and begged him, saying, 'Have patience with me, and I will repay you!'
Mat 18:30 He would not, but went and cast him into prison, until he should pay back that which was due.
Mat 18:31 So when his fellow servants saw what was done, they were exceedingly sorry, and came and told to their lord all that was done.
Mat 18:32 Then his lord called him in, and said to him, 'You wicked servant! I forgave you all that debt, because you begged me.
Mat 18:33 Shouldn't you also have had mercy on your fellow servant, even as I had mercy on you?'
Mat 18:34 His lord was angry, and delivered him to the tormentors, until he should pay all that was due to him.
Mat 18:35 So my heavenly Father will also do to you, if you don't each forgive your brother from your hearts for his misdeeds."
Email ThisBlogThis!Share to TwitterShare to FacebookShare to Pinterest

The Celebration of Easter by Mark Copeland

http://executableoutlines.com/top/easter.htm
Should the church do this? ... Gary
Email ThisBlogThis!Share to TwitterShare to FacebookShare to Pinterest
Newer Posts Older Posts Home
Subscribe to: Posts (Atom)