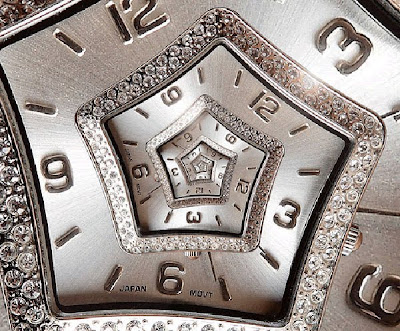 Time has changed. I remember when I was young, there was morning, lunch, nap-time, supper and bedtime. Then along came grade school with its regimentation. High School and college had their own sense of time. Over the past decade or two, time seems to have became faster and faster; the days and years seem to just fly by. And then there are the timepieces. Mickey mouse watches and BIG clocks with huge hands. Today, you see binary clocks, future clocks, atomic clocks, celestial ones and so many it would take a couple of pages just to list them all. Now, this isn't a bad thing; its good that things change, it keeps you thinking. But, I wonder, will it ever come to a head? I don't know, but as you step back and look at our society, things are forming patterns of change. For me, I think we are living in the last generation before the return of the Christ, but hey, I have been wrong before. I even voted for Richard M. Nixon (twice). The good news is: God is never wrong; his time is always the right time. Ephesians chapter one seems good to mention at this point, so read on....
Eph 1:1-14 (WEB)
1) Paul, an apostle of Christ Jesus through the will of God, to the saints who are at Ephesus, and the faithful in Christ Jesus:
2) Grace to you and peace from God our Father and the Lord Jesus Christ.
3) Blessed be the God and Father of our Lord Jesus Christ, who has blessed us with every spiritual blessing in the heavenly places in Christ;
4) even as he chose us in him before the foundation of the world, that we would be holy and without blemish before him in love;
5) having predestined us for adoption as children through Jesus Christ to himself, according to the good pleasure of his desire,
6) to the praise of the glory of his grace, by which he freely bestowed favor on us in the Beloved,
7) in whom we have our redemption through his blood, the forgiveness of our trespasses, according to the riches of his grace,
8) which he made to abound toward us in all wisdom and prudence,
9) making known to us the mystery of his will, according to his good pleasure which he purposed in him
10) to an administration of the fullness of the times, to sum up all things in Christ, the things in the heavens, and the things on the earth, in him;
11) in whom also we were assigned an inheritance, having been foreordained according to the purpose of him who works all things after the counsel of his will;
12) to the end that we should be to the praise of his glory, we who had before hoped in Christ:
13) in whom you also, having heard the word of the truth, the Good News of your salvation—in whom, having also believed, you were sealed with the Holy Spirit of promise,
14) who is a pledge of our inheritance, to the redemption of God’s own possession, to the praise of his glory.

The Hebrew Bible is not without a plan. God has been working with his created beings since the foundation of the world. Ultimately, he chose the people we know as the Jews and from them one very special man to lead ALL THE REST OF THE WORLD TO GOD! Understanding this is like looking at the watch in the picture. First you see the vague outline of the times (the outside of the watch, indicating the hours) and then as you understand more and more you gradually come to the point of being able to read the fine print (at the center of the watch, the seconds). God's time is his time and not ours. We know when Jesus came and went, but when he will come again, well, that is one very good question. Maybe the watch will tell me, I just wish I had the Japanese manual.
Email ThisBlogThis!Share to TwitterShare to FacebookShare to Pinterest 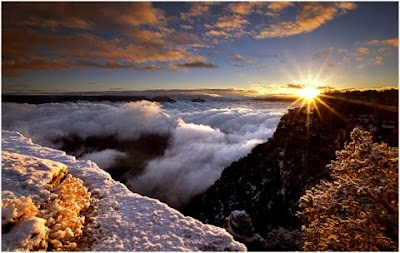 I wonder, How many sunrises have I seen? Probably more than most because for a number of years I worked the overnight shift and I always made sure to schedule my break at first-light. So, sunrises are quite special to me; something that I always look forward to seeing. This one is different, as you look down as well as up when you see the sun. Interesting! A new perspective on a "common" occurrence. Somehow, I thought of Zacharias, who had been left without speech after his encounter with an angel in the temple. How ordinary it is for us to talk, but if for some reason you can't for awhile, then your first words flow in joyous tumult. Listen (that is, read) to what he has to say.
Luke 1:67-80 (WEB)
67) His father, Zacharias, was filled with the Holy Spirit, and prophesied, saying,
68) “Blessed be the Lord, the God of Israel, for he has visited and worked redemption for his people;
69) and has raised up a horn of salvation for us in the house of his servant David
70) (as he spoke by the mouth of his holy prophets who have been from of old),
71) salvation from our enemies, and from the hand of all who hate us;
72) to show mercy towards our fathers, to remember his holy covenant,
73) the oath which he spoke to Abraham, our father,
74) to grant to us that we, being delivered out of the hand of our enemies, should serve him without fear,
75) In holiness and righteousness before him all the days of our life.
76) And you, child, will be called a prophet of the Most High, for you will go before the face of the Lord to prepare his ways,
77) to give knowledge of salvation to his people by the remission of their sins,
78) because of the tender mercy of our God, whereby the dawn from on high will visit us,
79) to shine on those who sit in darkness and the shadow of death; to guide our feet into the way of peace.”
80) The child was growing, and becoming strong in spirit, and was in the desert until the day of his public appearance to Israel.

Zacharias' son John was to be a great prophet and naturally this made Zacharias overjoyed, but he also put things in perspective by realizing that John was just to be a herald of the one to come. A herald of the dawn of a new age, one where God-in-the-flesh was to teach in person the way to true peace. It was if all mankind had suddenly been raised a little higher; to the very top of the world to see to see a new dawn and view it through the eyes of heaven itself.
Email ThisBlogThis!Share to TwitterShare to FacebookShare to Pinterest
Newer Posts Older Posts Home
Subscribe to: Posts (Atom)