Change can be a good thing.... 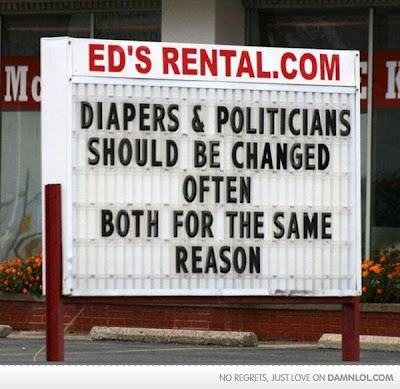 Well, we all know what diapers contain; as for politicians, who can argue with a public sign?  I don't know about you, but I wish it was November 2nd, not June 2nd!!!  This year several billion dollars will be spent on political television ads and frankly that is out of control.  It is obvious to me that those in political office are interested solely in their own interests and not mine.  In fact, it seems that they are trying to destroy our way of life.  So, this year, I am sick to death of politics as usual.  However, this passage from the book of Romans comes back to goad me into correct thinking...

Romans, Chapter 13
1 Let every soul be in subjection to the higher authorities, for there is no authority except from God, and those who exist are ordained by God. 2 Therefore he who resists the authority, withstands the ordinance of God; and those who withstand will receive to themselves judgment.  3 For rulers are not a terror to the good work, but to the evil. Do you desire to have no fear of the authority? Do that which is good, and you will have praise from the same, 4 for he is a servant of God to you for good. But if you do that which is evil, be afraid, for he doesn’t bear the sword in vain; for he is a servant of God, an avenger for wrath to him who does evil. 5 Therefore you need to be in subjection, not only because of the wrath, but also for conscience’ sake.  6 For this reason you also pay taxes, for they are servants of God’s service, attending continually on this very thing.  7 Give therefore to everyone what you owe: taxes to whom taxes are due; customs to whom customs; respect to whom respect; honor to whom honor.

There you have it; submission to authority.  Frankly, as a United States citizen, it is hard for me to swallow this, but I must.  It just seems like our government is becoming anti-Christian and who likes persecution?  How long can I tolerate this trend?  I wish I knew.  Perhaps it is me who has a bad attitude; or to put it another way.... I am full of it.  No, wait, that can't be true... because I am not a politician.
Email ThisBlogThis!Share to TwitterShare to FacebookShare to Pinterest

"ACTS OF THE APOSTLES" Chapter Sixteen by Mark Copeland