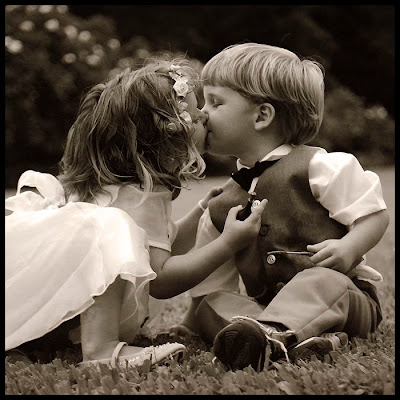 Maybe I am just on a sentimental kick today, but this is one beautiful picture! For those of you who have had a "special friend" in the early grades in school, this little photo will have a special meaning. Who knows if they will ever get together as adults, but it would be nice to think they might! Sometimes, however, things don't always work out and here is a good example from the book of Judges.

Samson was quite a character; blessed by God with exceptional strength, but subject to all the weakness of the male of the species. He took what he wanted out of life without regard for the wishes of his creator and ultimately paid a price for it. Samson had lost that purity that the kids in the picture obviously have and that loss was a great one indeed!!! In the next chapter of Judges, we see God using Samson, but I can't help but wonder what Samson's life would have been like if he had remained pure. In case you are wondering, my first girlfriend was named Susan and I used to bring her flowers and we would sit in the front seat on the school bus. Love is a wonderful thing; somehow, it was extra special in the first grade.
Email ThisBlogThis!Share to TwitterShare to FacebookShare to Pinterest
Newer Posts Older Posts Home
Subscribe to: Posts (Atom)