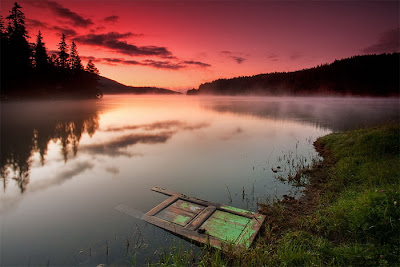 At first glance this picture was breathtaking. Then, I noticed what looks like a broken door at the bottom. What junk, I thought, I will just edit it out and use the beautiful picture, but then I realized... it is what it is.... so deal with it. How many times are we tempted to circumvent problems and just alter the facts to make a point? God doesn't make junk; man does. Tell it like it is and deal with the situation. And then this verse came to mind....
Esther 8:13 Complete Apostles' Bible
(13) And the following is the copy of the letter of the orders: The great King Artaxerxes sends greeting to the rulers of the provinces in a hundred and twenty-seven satraps, from India to Ethiopia, even to those who are faithful to our interests. Many who have been frequently honored by the most abundant kindness of their benefactors have conceived ambitious designs, and not only endeavor to hurt our subjects, but moreover, not being able to bear prosperity, they also endeavor to plot against their own benefactors. And they not only would utterly abolish gratitude from among men, but also, elated by the boastings of men who are strangers to all that is good, they suppose that they shall escape the sin-hating vengeance of the ever-seeing God. And oftentimes evil exhortation has made partakers of the guilt of shedding innocent blood, and has involved in irremediable calamities, many of those who were appointed to offices of authority, who had been entrusted with the management of their friends' affairs. While men, by the false sophistry of an evil disposition, have deceived the simple candor of the ruling powers. And it is possible to see this, not so much from more ancient traditionary accounts, as it is immediately in your power to see it by examining what things have been wickedly perpetrated by the baseness of men holding power in an unworthy manner. And it is right to take heed with regard to the future, that we may maintain the government in undisturbed peace for all men, adopting needful changes, and ever judging those cases which come under our notice, with truly equitable decision. For whereas Haman, a Macedonian, the son of Hammedatha, in reality an alien from the blood of the Persians, and differing widely from our mild course of government, having been hospitably entertained by us, obtained so large a share of our universal kindness, as to be called our father, and to continue the person next to the royal throne, reverenced by all. He, however, overcome by the pride of his station, endeavored to deprive us of our dominion, and our life; having by various and subtle artifices demanded for destruction both Mordecai, our deliverer and perpetual benefactor, and Esther, the blameless consort of our kingdom, with their whole nation. For by these methods, the thought, having surprised us in a defenseless rate, to transfer the dominion of the Persians to the Macedonians. But we find that the Jews, who have been consigned to destruction by the most abominable of men, are not malefactors, but living according to the most just laws, and being the sons of the living God, the Most High and Mighty, who maintains the kingdom, to us as well as to our forefathers, in the most excellent order. You will therefore do well in refusing to obey the letters sent by Haman the son of Hammedatha, because he that has done these things has been hanged with his whole family at the gates of Susa, Almighty God having swiftly returned to him a worthy recompense. We beseech you, therefore, having openly published a copy of this letter in every place, to give the Jews permission to use their own lawful customs, and to strengthen them, that on the thirteenth day of the twelfth month of Adar, on that same day, they may defend themselves against those who attacked them in a time of affliction. For in the place of the destruction of the chosen race, Almighty God has granted them this time of gladness. Therefore you also among your notable feasts, keep a distinct day with all festivity, that both now and hereafter it may be a day of deliverance to us and those who are well disposed toward the Persians, but to those that plotted against us a memorial of destruction. And every city and province collectively, which shall not do accordingly, shall be consumed with vengeance by spear and fire. It shall be made not only inaccessible to men, but also most hateful to wild beasts and birds forever. And let the copies be posted in conspicuous places throughout the kingdom, and let all the Jews be ready against this day, to fight against their enemies.
This has got to be one of the longest verses in the Bible, but it sets things straight and that is why I like it! Some times you just have to admit to a problem and just deal with it. OK, cleanup the lake and make it beautiful again; just do it! That's what the great King Artaxerxes did with his kingdom; he cleaned it of evil and saved God's chosen people. And then everything was beautiful once more. End of story!!
Email ThisBlogThis!Share to TwitterShare to FacebookShare to Pinterest
Newer Posts Older Posts Home
Subscribe to: Posts (Atom)