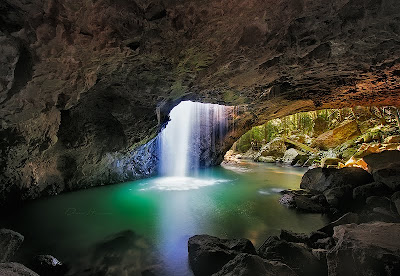 One beautiful picture! I especially like the reflections on the water which range from a yellow green (top right) to a light blue (bottom middle). I saw a movie last week based on the life of Thomas Kinkade (A Christmas Cottage) in which Thomas' mentor urges him to focus on "the light" in his paintings. Today, Thomas is known as the painter of light, so I guess he listened.
Sometimes, the indirect things of life bring in new meanings and depth of understanding, which of course made me think of John the Baptist. Here is an excerpt from one of my favorite chapters in the New Testament.
John 1:6-16 (WEB)
6) There came a man, sent from God, whose name was John.
7) The same came as a witness, that he might testify about the light, that all might believe through him.
8) He was not the light, but was sent that he might testify about the light.
9) The true light that enlightens everyone was coming into the world.
10) He was in the world, and the world was made through him, and the world didn’t recognize him.
11) He came to his own, and those who were his own didn’t receive him.
12) But as many as received him, to them he gave the right to become God’s children, to those who believe in his name:
13) who were born not of blood, nor of the will of the flesh, nor of the will of man, but of God.
14) The Word became flesh, and lived among us. We saw his glory, such glory as of the one and only Son of the Father, full of grace and truth.
15) John testified about him. He cried out, saying, “This was he of whom I said, ‘He who comes after me has surpassed me, for he was before me.’”
16) From his fullness we all received grace upon grace.
(John 1:6-16, WEB)

John was an unusual character, something like Elijah of the Old Testament. He got through to many, many people and pointed them in the right direction (to Jesus). Like the shadows and highlights in the picture, he added color to the overall scene. Not a bad job for someone who ate Locusts and wild honey. It occured to me that we can be something like a Baptist ourselves, as long as we point people in the right direction. Just eat a little differently, that's all.
Email ThisBlogThis!Share to TwitterShare to FacebookShare to Pinterest
Newer Posts Older Posts Home
Subscribe to: Posts (Atom)