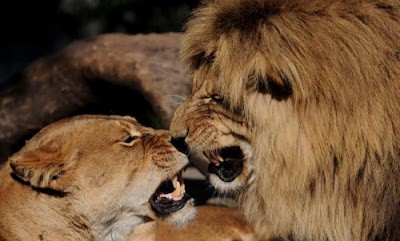 Even the "king" of beasts looks like he is having a problem at home. And by the look on "her" face, it appears that he has an uphill battle. Those of us who have been married awhile, know how truly different men and women are; they just think differently. If you have a few moments, read the following passage from the book of Ephesians and give it a little thought.
Eph 5:22-33
22 Wives, be subject to your own husbands, as to the Lord.23 For the husband is the head of the wife, and Christ also is the head of the assembly, being himself the savior of the body.24 But as the assembly is subject to Christ, so let the wives also be to their own husbands in everything.25 Husbands, love your wives, even as Christ also loved the assembly, and gave himself up for it;26 that he might sanctify it, having cleansed it by the washing of water with the word,27 that he might present the assembly to himself gloriously, not having spot or wrinkle or any such thing; but that it should be holy and without blemish.28 Even so ought husbands also to love their own wives as their own bodies. He who loves his own wife loves himself.29 For no man ever hated his own flesh; but nourishes and cherishes it, even as the Lord also does the assembly;30 because we are members of his body, of his flesh and bones.31 "For this cause a man will leave his father and mother, and will be joined to his wife. The two will become one flesh."32 This mystery is great, but I speak concerning Christ and of the assembly.33 Nevertheless each of you must also love his own wife even as himself; and let the wife see that she respects her husband.WEB
OK, sometimes there just has to be a "final word" that stops all discussion and this is the role of the male. However, the times that this happens in my household have decreased sharply with each passing decade because as time goes by we understand one another better. This isn't the primary focus of the passage, however; love is. If we love one another, we will TRY TO UNDERSTAND, TRY TO GET ALONG, TRY TO WORK THINGS OUT. Notice a key word here? No, its not TRY, but rather love. Christ is the example, love is the motivation, harmony is the outcome. Of course there will be problems, but I like to think of them more as opportunities to grow rather than obstacles to overcome. So, the next time there is a difference of opinion, remember that marriage is more than a physical cohabitation, it is a spiritual union, with the God of all the Earth, right there, helping you, guiding you and loving you though it all. By the way, its also a good idea not to show your teeth at your spouse; you might regret it.
Email ThisBlogThis!Share to TwitterShare to FacebookShare to Pinterest
Newer Posts Older Posts Home
Subscribe to: Posts (Atom)