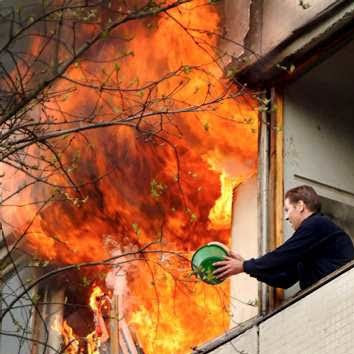 Fire; with it we warm our homes, cook our food and watch it as it burns in our fireplaces. Once it starts in a situation where we have no control, it becomes terrifying. Our natural instinct is to put it out at any cost, without thinking. I guess that what this person in the picture was doing... not thinking. If I were him, I would only do one thing...run! Fire inspires great fear, yet sometimes it is not to be feared, as this passage from the book of Daniel shows us.
Dan 3:15-29
15 Now if you are ready whenever you hear the sound of the horn, flute, zither, lyre, harp, pipe, and all kinds of music to fall down and worship the image which I have made, well: but if you don't worship, you shall be cast the same hour into the midst of a burning fiery furnace; and who is that god that shall deliver you out of my hands?16 Shadrach, Meshach, and Abednego answered the king, Nebuchadnezzar, we have no need to answer you in this matter.17 If it be so, our God whom we serve is able to deliver us from the burning fiery furnace; and he will deliver us out of your hand, O king.18 But if not, be it known to you, O king, that we will not serve your gods, nor worship the golden image which you have set up.19 Then was Nebuchadnezzar full of fury, and the form of his visage was changed against Shadrach, Meshach, and Abednego: therefore he spoke, and commanded that they should heat the furnace seven times more than it was usually heated.20 He commanded certain mighty men who were in his army to bind Shadrach, Meshach, and Abednego, and to cast them into the burning fiery furnace.21 Then these men were bound in their pants, their tunics, and their mantles, and their other garments, and were cast into the midst of the burning fiery furnace.22 Therefore because the king's commandment was urgent, and the furnace exceeding hot, the flame of the fire killed those men who took up Shadrach, Meshach, and Abednego.23 These three men, Shadrach, Meshach, and Abednego, fell down bound into the midst of the burning fiery furnace.24 Then Nebuchadnezzar the king was astonished, and rose up in haste: he spoke and said to his counselors, Didn't we cast three men bound into the midst of the fire? They answered the king, True, O king.25 He answered, Look, I see four men loose, walking in the midst of the fire, and they have no hurt; and the aspect of the fourth is like a son of the gods.26 Then Nebuchadnezzar came near to the mouth of the burning fiery furnace: he spoke and said, Shadrach, Meshach, and Abednego, you servants of the Most High God, come forth, and come here. Then Shadrach, Meshach, and Abednego came forth out of the midst of the fire.27 The satraps, the deputies, and the governors, and the king's counselors, being gathered together, saw these men, that the fire had no power on their bodies, nor was the hair of their head singed, neither were their pants changed, nor had the smell of fire passed on them.28 Nebuchadnezzar spoke and said, Blessed be the God of Shadrach, Meshach, and Abednego, who has sent his angel, and delivered his servants who trusted in him, and have changed the king's word, and have yielded their bodies, that they might not serve nor worship any god, except their own God.29 Therefore I make a decree, that every people, nation, and language, which speak anything evil against the God of Shadrach, Meshach, and Abednego, shall be cut in pieces, and their houses shall be made a dunghill; because there is no other god who is able to deliver after this sort. WEB
To die a death by fire is a fearsome thing, but God is to be feared even more. In this case, God chose to save the three from destruction to teach a great king a lesson. The king listened and God was glorified; end of story. Well, perhaps not, because who knows, maybe someday we might have a choice like this to make as well. I only hope it doesn't involve fire. In the meantime, will someone tell that man to get a BIGGER BUCKET!!
Email ThisBlogThis!Share to TwitterShare to FacebookShare to Pinterest
Newer Posts Older Posts Home
Subscribe to: Posts (Atom)