From Rainbows to REALITY 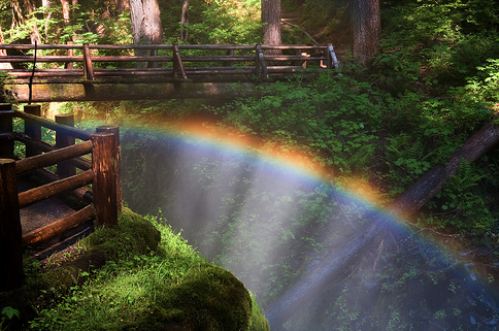 When I think of rainbows, they are in the heavens; unreachable and illusive. Yet, here is one within reach and right down to Earth.  And with a bridge over it, to boot.  Somehow this is a more wonderful sight than anything I have seen before as it is REACHABLE.  Not some pie-in-the-sky concept, but attainable.  This almost makes me want to be on that bridge, almost makes me NEED TO BE ON THAT BRIDGE!!!  Why?  Because if I CAN cross over to the end of the rainbow, I WANT TO!!!!  For me, this brings the following Scripture to the forefront of my thinking yet once again....

Ephesians, Chapter 1
3 Blessed be the God and Father of our Lord Jesus Christ, who has blessed us with every spiritual blessing in the heavenly places in Christ;  4 even as he chose us in him before the foundation of the world, that we would be holy and without blemish before him in love; 5 having predestined us for adoption as children through Jesus Christ to himself, according to the good pleasure of his desire,  6 to the praise of the glory of his grace, by which he freely bestowed favor on us in the Beloved,  7 in whom we have our redemption through his blood, the forgiveness of our trespasses, according to the riches of his grace,  8 which he made to abound toward us in all wisdom and prudence,  9 making known to us the mystery of his will, according to his good pleasure which he purposed in him  10 to an administration of the fullness of the times, to sum up all things in Christ, the things in the heavens, and the things on the earth, in him;  11 in whom also we were assigned an inheritance, having been foreordained according to the purpose of him who works all things after the counsel of his will;  12 to the end that we should be to the praise of his glory, we who had before hoped in Christ:  13 in whom you also, having heard the word of the truth, the Good News of your salvation—in whom, having also believed, you were sealed with the Holy Spirit of promise,  14 who is a pledge of our inheritance, to the redemption of God’s own possession, to the praise of his glory.

Blessed in heaven and blessed on Earth.  Its not the location, its what has been done for us.  How often are we overwhelmed with the troubles of this life, how many times are we reminded of the evils in this world... almost daily?  Yet, there is something better, something wonderful that awaits us and the thought of it sends my mind to marvel!!!  The picture shows a rainbow and for those of you who have read this blog before, you have seen many of them!!!  But, in my mind this one says it best, as I can imagine Jesus as the bridge between where I am and the end of the rainbow... heaven.  You may think this is just wishful thinking, BUT, Jesus actually lived and died for each of us.  More than that, his resurrection proves his message to be truth and that's better than any pot of Gold at the end of any rainbow!!!!

"ACTS OF THE APOSTLES" Chapter Twenty-Two by Mark Copeland