Face it, a change is needed 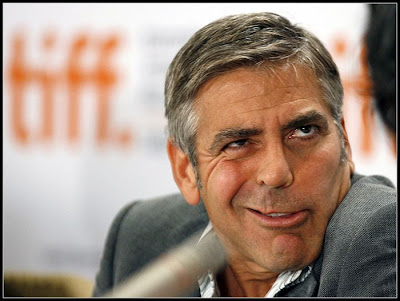 I have always thought a lot of George Clooney. His irresistible charm came through loud and clear in the series "ER" and later in the "Oceans" movies. But this picture is less than wonderful. When he distorts his face like this it seems like a very, very unnatural thing for him to be doing. Yet, here it is, unflattering to the extreme. We all have our moments, some of them really good and some not-so-good. Yesterday, I read the following passage during my daily readings, so naturally it came to mind. Luke says:
Luke 22:48-62 (WEB)
48) But Jesus said to him, “Judas, do you betray the Son of Man with a kiss?”
49) When those who were around him saw what was about to happen, they said to him, “Lord, shall we strike with the sword?”
50) A certain one of them struck the servant of the high priest, and cut off his right ear.
51) But Jesus answered, “Let me at least do this”—and he touched his ear, and healed him.
52) Jesus said to the chief priests, captains of the temple, and elders, who had come against him, “Have you come out as against a robber, with swords and clubs?
53) When I was with you in the temple daily, you didn’t stretch out your hands against me. But this is your hour, and the power of darkness.”
54) They seized him, and led him away, and brought him into the high priest’s house. But Peter followed from a distance.
55) When they had kindled a fire in the middle of the courtyard, and had sat down together, Peter sat among them.
56) A certain servant girl saw him as he sat in the light, and looking intently at him, said, “This man also was with him.”
57) He denied Jesus, saying, “Woman, I don’t know him.”
58) After a little while someone else saw him, and said, “You also are one of them!” But Peter answered, “Man, I am not!”
59) After about one hour passed, another confidently affirmed, saying, “Truly this man also was with him, for he is a Galilean!”
60) But Peter said, “Man, I don’t know what you are talking about!” Immediately, while he was still speaking, a rooster crowed.
61) The Lord turned, and looked at Peter. Then Peter remembered the Lord’s word, how he said to him, “Before the rooster crows you will deny me three times.”
62) He went out, and wept bitterly.
(Luke 22:48-62, WEB)

We do things we wish we hadn't, we say things we wish had never come across or lips, but what if we were told ahead of time and did something stupid anyway. Hard to swallow? You bet! But that is exactly what happened to Peter. To his credit, he turned his actions around and followed Christ to the end of his life. That is the great thing about the grace of God, as long as you are alive you can change, you can be better, you can turn your life around. And the best part of it is... you are not alone... God will help. As far as faces go, lets hope its not too cold where George Clooney is... his face might freeze like that! And that would really put a crimp in his monetary negotiations with the movie studios.
Email ThisBlogThis!Share to TwitterShare to FacebookShare to Pinterest
Newer Posts Older Posts Home
Subscribe to: Posts (Atom)