What kind of example do you set? 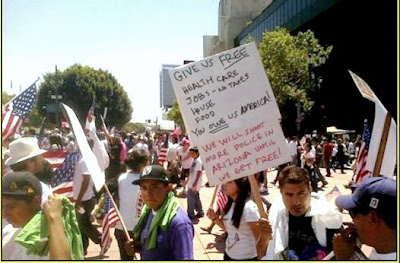 I find this picture appalling! Right now, people are being raped, killed and their property destroyed in the state of Arizona and people have such low moral values as to parade with signs like these! If this goes unchecked, America as we know it will no longer exist!! Frankly, I hope I do not live to see the fall of America, but as unthinkable as it is... it is possible!! How should we respond? As CITIZENS, work within the framework of the republic and urge every public official to DO THEIR JOB. Personally, we who call ourselves Christians, have a higher calling and must answer to the highest possible authority; God! Read the following chapter from the book of 1st Peter to see my frame of reference.
1 Peter 4:1-19 (WEB)
1) Forasmuch then as Christ suffered for us in the flesh, arm yourselves also with the same mind; for he who has suffered in the flesh has ceased from sin;
2) that you no longer should live the rest of your time in the flesh for the lusts of men, but for the will of God.
3) For we have spent enough of our past time doing the desire of the Gentiles, and having walked in lewdness, lusts, drunken binges, orgies, carousings, and abominable idolatries.
4) They think it is strange that you don’t run with them into the same excess of riot, blaspheming:
5) who will give account to him who is ready to judge the living and the dead.
6) For to this end the Good News was preached even to the dead, that they might be judged indeed as men in the flesh, but live as to God in the spirit.
7) But the end of all things is near. Therefore be of sound mind, self-controlled, and sober in prayer.
8) And above all things be earnest in your love among yourselves, for love covers a multitude of sins.
9) Be hospitable to one another without grumbling.
10) As each has received a gift, employ it in serving one another, as good managers of the grace of God in its various forms.
11) If anyone speaks, let it be as it were the very words of God. If anyone serves, let it be as of the strength which God supplies, that in all things God may be glorified through Jesus Christ, to whom belong the glory and the dominion forever and ever. Amen.
12) Beloved, don’t be astonished at the fiery trial which has come upon you, to test you, as though a strange thing happened to you.
13) But because you are partakers of Christ’s sufferings, rejoice; that at the revelation of his glory you also may rejoice with exceeding joy.
14) If you are insulted for the name of Christ, you are blessed; because the Spirit of glory and of God rests on you. On their part he is blasphemed, but on your part he is glorified.
15) For let none of you suffer as a murderer, or a thief, or an evil doer, or a meddler in other men’s matters.
16) But if one of you suffers for being a Christian, let him not be ashamed; but let him glorify God in this matter.
17) For the time has come for judgment to begin with the household of God. If it begins first with us, what will happen to those who don’t obey the Good News of God?
18) “If it is hard for the righteous to be saved, what will happen to the ungodly and the sinner?”
19) Therefore let them also who suffer according to the will of God in doing good entrust their souls to him, as to a faithful Creator.
(1 Peter 4:1-19, WEB)

For many, its tempting to go along with the crowd, to do what everyone else is doing and not really think about the right or wrong of it. There are consequences for what we do, for each and every one of us. Ultimately, the people in the picture will answer for their actions. Until then, follow the Godly way set by the Christ of God. Please join with me in prayer for those suffering in Arizona. Pray also that those in power do what is right TOWARDS THE CITIZENS OF THIS COUNTRY! People can make all the signs they want, yell, scream and threaten but that does not change the fact that murder is wrong and people who advocate such actions are WRONG! Not sure what to do.... reread chapter 4 above!
Email ThisBlogThis!Share to TwitterShare to FacebookShare to Pinterest

Tenants, are you looking for the owner? 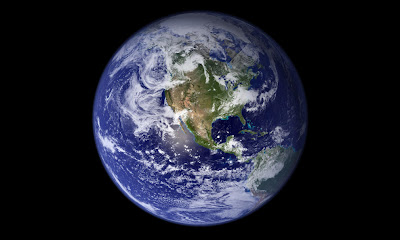 The latest (and greatest?) picture of Terra, captured on Earth day 2010. Its amazing that humans have progressed this far; imagine, being able to see half of the entire planet at one time. What next, to be able to simultaneously see the dark side as well? Perhaps, but I don't think that is coming any time soon. This picture brings to mind the close of the movie 2010, where Roy Schneider reminds us that we are only the tenants of this world and not the owners. To find the true owner, read the following passage from the book of Deuteronomy.
Deuteronomy 10:12-21 (WEB)
12) Now, Israel, what does Yahweh your God require of you, but to fear Yahweh your God, to walk in all his ways, and to love him, and to serve Yahweh your God with all your heart and with all your soul,
13) to keep the commandments of Yahweh, and his statutes, which I command you this day for your good?
14) Behold, to Yahweh your God belongs heaven and the heaven of heavens, the earth, with all that is therein.
15) Only Yahweh had a delight in your fathers to love them, and he chose their seed after them, even you above all peoples, as at this day.
16) Circumcise therefore the foreskin of your heart, and be no more stiff-necked.
17) For Yahweh your God, he is God of gods, and Lord of lords, the great God, the mighty, and the awesome, who doesn’t respect persons, nor takes reward.
18) He does execute justice for the fatherless and widow, and loves the foreigner, in giving him food and clothing.
19) Therefore love the foreigner; for you were foreigners in the land of Egypt.
20) You shall fear Yahweh your God; you shall serve him; and you shall cling to him, and you shall swear by his name.
21) He is your praise, and he is your God, who has done for you these great and awesome things, which your eyes have seen.
(Deuteronomy 10:12-21, WEB)

Think! Consider all the problems that are out there; global warming, overpopulation, nuclear proliferation, aids, not to mention war, famine and a list so long that it would be downright rude of me to be thorough. But one thing is certain, most of our problems originate within the deep recesses of the human heart with a little problem called sin. I know its not fashionable to mention sin today, but it is necessary. Necessary, because in its diagnosis, there is a common denominator and that would be the human tendency of placing ourselves ahead of God's will for our lives. Not sure what that will is: read verse 12. Still not sure, go outside and look at the next full moon and imagine you could look back at Earth. You might see something like the picture from Earth day, above. Once you realize that everything you have seen or will ever see belongs to God, things will begin to change; starting with you.
Email ThisBlogThis!Share to TwitterShare to FacebookShare to Pinterest
Newer Posts Older Posts Home
Subscribe to: Posts (Atom)