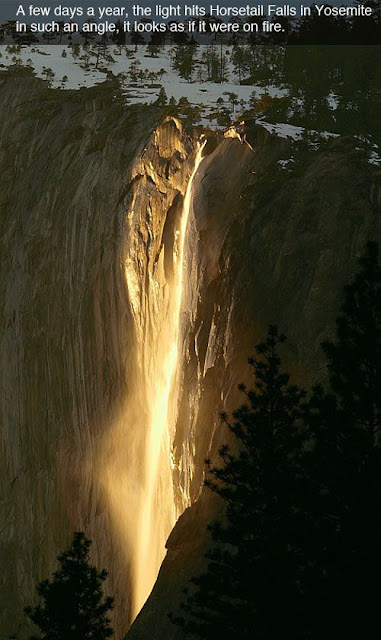 I have never been to Horsetail falls, let alone seen this rarity, but who knows, maybe I will???  However, I still can marvel at this water become fire.  Hard to imagine such a thing, but then again the whole world is full of surprises.  How does a little bit of light accomplish such a wondrous illusion?  No idea, but I still can appreciate it nonetheless. Which brings me to another thing I don't understand (one of many) from the Bible; this time its from the book of 2nd Kings....

How EXACTLY DID God take Elijah into the heavens anyway? Again, no idea. Why did Elisha want a double portion of the spirit given to Elijah?  I can only guess.  How did the mantle hitting the waters part them? Like the preceding questions... no idea!!!  What I do know is that it happened and that is good enough for me.  Some things should just be accepted on faith.  Just because I don't understand them doesn't mean they are NOT TRUE!!!  Perhaps someone might explain the optical illusion of water becoming fire to me someday, who knows?  But as far as the other questions go, I will just have to wait until I enter heaven for the answers.  And I have a very strong feeling that by that time I will have one VERY LONG LIST!!!!

"THE FIRST EPISTLE TO THE CORINTHIANS" Chapter Three by Mark copeland