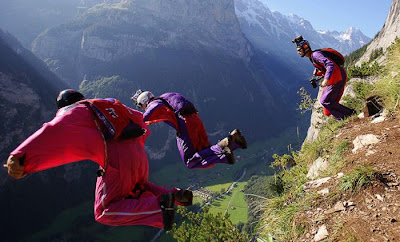 This picture reminds me of the phrase that mothers often use: If your friends jump off a cliff, I suppose you would jump too. This is what they do; jump off cliffs and glide until they are near the bottom and then they pull their ripcords and rely on parachutes to arrrive safely on the ground. Pretty dangerous stuff! Listen to what the Almighty has to say about the influence of "friends".

Deuteronomy 13:6-9 WEB (R)
(6) If your brother, the son of your mother, or your son, or your daughter, or the wife of your bosom, or your friend, who is as your own soul, entice you secretly, saying, Let us go and serve other gods, which you have not known, you, nor your fathers;
(7) of the gods of the peoples who are around you, near to you, or far off from you, from the one end of the earth even to the other end of the earth;
(8) you shall not consent to him, nor listen to him; neither shall your eye pity him, neither shall you spare, neither shall you conceal him:
(9) but you shall surely kill him; your hand shall be first on him to put him to death, and afterwards the hand of all the people.

Israel was supposed to be different; holy to God. They were to have nothing to do with idols or the pagan gods of the people of Palestine. Some things you should never do, regardless of who tried to get you to them. I am quite sure that I will never be caught jumping off a cliff and I hope you wouldn't either. Besides, I don't look good in red.
Email ThisBlogThis!Share to TwitterShare to FacebookShare to Pinterest
Newer Posts Older Posts Home
Subscribe to: Posts (Atom)