No, this isn't a Roshack (excuse the spelling) test. I would ask you what you see, however. To me, its either a white and black picture of a woman OR a black and white picture of a sax player. What you see is a reflection of what you are thinking about. The Apostle Paul thought about others a lot as this passage from the book of Philippians shows.
Phil 1:1-8 1 Paul and Timothy, servants of Jesus Christ; To all the saints in Christ Jesus who are at Philippi, with the overseers and deacons:
2 Grace to you, and peace from God, our Father, and the Lord Jesus Christ.
3 I thank my God whenever I remember you,
4 always in every request of mine on behalf of you all making my requests with joy,
5 for your partnership in furtherance of the Good News from the first day until now;
6 being confident of this very thing, that he who began a good work in you will complete it until the day of Jesus Christ.
7 It is even right for me to think this way on behalf of all of you, because I have you in my heart, because, both in my bonds and in the defense and confirmation of the Good News, you all are partakers with me of grace.
8 For God is my witness, how I long after all of you in the tender mercies of Christ Jesus.WEB
They were on his mind, daily. What a thought! They were with him daily in his prayers. They cared for him and he cared for them. Love is a powerful thing; it changes things! When you go through your daily activities tomorrow, just take a minute now and then to consider what you have thought about. Hopefully, you won't be blowing your own horn, but perhaps you may see the beauty and worth of others around you. If you do, you have passed the test.
Email ThisBlogThis!Share to TwitterShare to FacebookShare to Pinterest 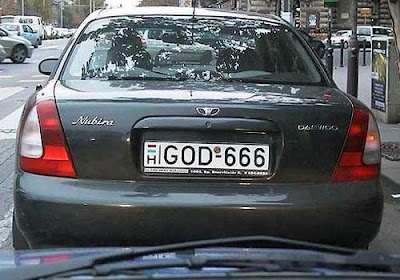 Pride is a horrible thing. It has been the source of so much suffering over the centuries that I can not even find words to express its extent. Pride has no limitations, boundaries or obstacles that can not be overcome. This is true in heaven and on Earth as well. In heaven there is Satan and on Earth, well, perhaps the owner of this car is someone who just might have one big problem. This passage from the book of Revelation describes just such a one. Try and think of an example of an Earthly application of this number (or man).

Rev 13 Then I stood on the sand of the sea. I saw a beast coming up out of the sea, having ten horns and seven heads. On his horns were ten crowns, and on his heads, blasphemous names.2 The beast which I saw was like a leopard, and his feet were like those of a bear, and his mouth like the mouth of a lion. The dragon gave him his power, his throne, and great authority.3 One of his heads looked like it had been wounded fatally. His fatal wound was healed, and the whole earth marveled at the beast.4 They worshiped the dragon, because he gave his authority to the beast, and they worshiped the beast, saying, "Who is like the beast? Who is able to make war with him?"5 A mouth speaking great things and blasphemy was given to him. Authority to make war for forty-two months was given to him.6 He opened his mouth for blasphemy against God, to blaspheme his name, and his dwelling, those who dwell in heaven.7 It was given to him to make war with the saints, and to overcome them. Authority over every tribe, people, language, and nation was given to him.8 All who dwell on the earth will worship him, everyone whose name has not been written from the foundation of the world in the book of life of the Lamb who has been killed.9 If anyone has an ear, let him hear.10 If anyone has captivity, he will go. If anyone is with the sword, he must be killed. Here is the endurance and the faith of the saints.11 I saw another beast coming up out of the earth. He had two horns like a lamb, and he spoke like a dragon.12 He exercises all the authority of the first beast in his presence. He makes the earth and those who dwell in it to worship the first beast, whose fatal wound was healed.13 He performs great signs, even making fire come down out of the sky to the earth in the sight of people.14 He deceives my own people who dwell on the earth because of the signs he was granted to do in front of the beast; saying to those who dwell on the earth, that they should make an image to the beast who had the sword wound and lived.15 It was given to him to give breath to it, to the image of the beast, that the image of the beast should both speak, and cause as many as wouldn't worship the image of the beast to be killed.16 He causes all, the small and the great, the rich and the poor, and the free and the slave, to be given marks on their right hands, or on their foreheads;17 and that no one would be able to buy or to sell, unless he has that mark, the name of the beast or the number of his name.18 Here is wisdom. He who has understanding, let him calculate the number of the beast, for it is the number of a man. His number is six hundred sixty-six. WEB


Why this number anyway? Called the Nero-kaiser-cryptograph it is a code name for the Emperor Nero of the 1st Century. But is that all? No, for everyone who does sin bears the name of sin. So, in this understanding, the great evil personages of History such as Genghis Kahn, Stalin, Hitler and many others would bear this title. It started in heaven with the pride of Satan who felt he was at least a 2nd God. Since each part of the triune nature of God is represented by a seven; God's number would be 777. If Satan were a second God, his number one less than THE GOD and would be 666; an unholy trinity to say the least. So, evil has a number and that number is a characteristic and an action and a person. Whoever lives the characteristic and the action puts themselves in the position of evil and therefore is a type of Satan. I hope some day to have the opportunity to meet the owner of this car; maybe he can be shown the errors of his ways; all he has to do is beyond his pride.
Email ThisBlogThis!Share to TwitterShare to FacebookShare to Pinterest
Newer Posts Older Posts Home
Subscribe to: Posts (Atom)