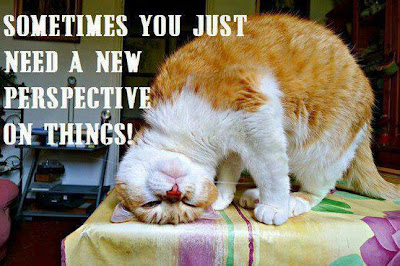 When I moved to Florida in 2004, I found a job working for CVS.  My first assignment was working on one of the Ekhert conversion teams and it was there I met Marge.  She was a couple of years older than me, but somehow we seemed to have a lot in common.....except cats.  She would talk about her "Maxie" and it was obvious that she loved him very, very much.  Well, I still don't own a cat, but all her praise for them has softened my attitude towards them considerably.  I don't think I will EVER get one though, because my wife is allergic to them.  So, when I was looking though my pictures today, I saw this and it caused me to reflect somewhat.  But, not in the way you would expect...

Acts, Chapter 17
22 Paul stood in the middle of the Areopagus, and said, “You men of Athens, I perceive that you are very religious in all things.  23 For as I passed along, and observed the objects of your worship, I found also an altar with this inscription: ‘TO AN UNKNOWN GOD.’ What therefore you worship in ignorance, this I announce to you.  24 The God who made the world and all things in it, he, being Lord of heaven and earth, doesn’t dwell in temples made with hands,  25 neither is he served by men’s hands, as though he needed anything, seeing he himself gives to all life and breath, and all things.  26 He made from one blood every nation of men to dwell on all the surface of the earth, having determined appointed seasons, and the boundaries of their dwellings, 27 that they should seek the Lord, if perhaps they might reach out for him and find him, though he is not far from each one of us.  28 ‘For in him we live, and move, and have our being.’ As some of your own poets have said, ‘For we are also his offspring.’  29 Being then the offspring of God, we ought not to think that the Divine Nature is like gold, or silver, or stone, engraved by art and design of man.  30 The times of ignorance therefore God overlooked. But now he commands that all people everywhere should repent,  31 because he has appointed a day in which he will judge the world in righteousness by the man whom he has ordained; of which he has given assurance to all men, in that he has raised him from the dead.”

If a cat look at life from another perspective, Why can't I?  I remember the saying: "You can't trust anyone over 30" and now that I am over 60, I know why.  The "why" is something I call sedimentation; that is, over a lifetime the things you have learned coalesce into a system of understanding that helps explain everything.  For me, it is the windowpane of the Scriptures; the interpreter of truth and wisdom.  For people of New Testament times it was human wisdom and more often than not, superstition.  Paul went into the city of Athens and observed the great number of deities they worshiped and challenged them to consider another, yet unlike the pantheon of deities they worshiped, THE GOD OF HEAVEN was the TRUE AND ONLY GOD!!!  Most of them would not change, but some could adopt a new perspective and see the truth for what it what... the only truth.  Aren't you glad that we don't have that trouble today?  Doesn't everyone accept the Bible as our only source of authority; the standard for all truth?  Unfortunately, about one half the world does not.  Perhaps some day, maybe even in my lifetime, that will change for the better, but until then, I will try to take some pointers from that cat and reconsider my life from all angles.  You can learn a lot from a cat and even more from the Bible.... try it, you WILL LIKE IT, I PROMISE!!!!

"THE EPISTLE TO THE ROMANS" Chapter Sixteen by Mark Copeland