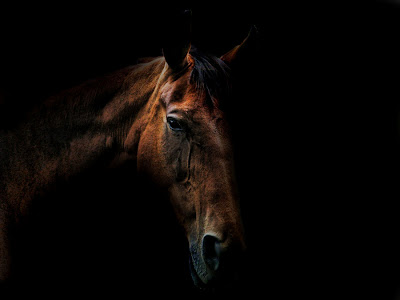 This picture of the horse just seems to draw you into it. By showing less of the horse you just want to look deeper and see what it is all about. Perhaps it is the contrast of the horse against the black background that has something to do with it. Christians are to stand out in a world of blackness as well. I like what Peter has to say in chapter two.


1 Peter 2:9-12 WEB (R)
(9) But you are a chosen race, a royal priesthood, a holy nation, a people for God's own possession, that you may proclaim the excellence of him who called you out of darkness into his marvelous light:
(10) who in time past were no people, but now are God's people, who had not obtained mercy, but now have obtained mercy.
(11) Beloved, I beg you as foreigners and pilgrims, to abstain from fleshly lusts, which war against the soul;
(12) having good behavior among the nations, so in that of which they speak against you as evildoers, they may by your good works, which they see, glorify God in the day of visitation.


Simple, when Christians practice what they purport to believe, they stand out in stark contrast to the worldliness around them. Like the picture, you tend not to look at the blackness (sin) anymore, but rather to look at the one being showcased in light. Question: Are you in the darkness or light?
Email ThisBlogThis!Share to TwitterShare to FacebookShare to Pinterest
Newer Posts Older Posts Home
Subscribe to: Posts (Atom)