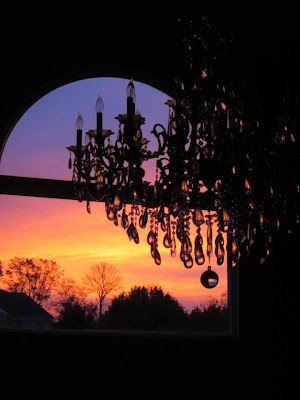 This is a sunrise picture from my daughter's dining room.  Its a gorgeous sunrise, and that alone is interesting, but the chandelier caught my attention.  For you see, my family were poor farm people and never in their wildest dreams could have imagined owning such a thing!!!  Yet, just a couple of generations later... success!  Not without huge amounts of hard work by my daughter and her husband, though.  Still, its hard for me to conceive of such financial success, but it can still happen in America.  Which makes me wonder what we really know about others and how often do we put ourselves in their shoes.  Today, in Bible class, we were listening to a lecture on baptism from the book of Acts and I began to understand something new about the topic.  And these three passages came to mind...
WEB: Acts Chapter 8

[26] But an angel of the Lord spoke to Philip, saying, “Arise, and go toward the south to the way that goes down from Jerusalem to Gaza. This is a desert.”

[27] He arose and went; and behold, there was a man of Ethiopia, a eunuch of great authority under Candace, queen of the Ethiopians, who was over all her treasure, who had come to Jerusalem to worship. [28] He was returning and sitting in his chariot, and was reading the prophet Isaiah.

[29] The Spirit said to Philip, “Go near, and join yourself to this chariot.”

[30] Philip ran to him, and heard him reading Isaiah the prophet, and said, “Do you understand what you are reading?”

[31] He said, “How can I, unless someone explains it to me?” He begged Philip to come up and sit with him. [32] Now the passage of the Scripture which he was reading was this,

“He was led as a sheep to the slaughter.
As a lamb before his shearer is silent,
so he doesn’t open his mouth.


[33] In his humiliation, his judgment was taken away.
Who will declare His generation?
For his life is taken from the earth.”


[34] The eunuch answered Philip, “Who is the prophet talking about? About himself, or about someone else?”

[35] Philip opened his mouth, and beginning from this Scripture, preached to him Jesus. [36] As they went on the way, they came to some water, and the eunuch said, “Behold, here is water. What is keeping me from being baptized?”
[37] [38] He commanded the chariot to stand still, and they both went down into the water, both Philip and the eunuch, and he baptized him.

[39] When they came up out of the water, the Spirit of the Lord caught Philip away, and the eunuch didn’t see him any more, for he went on his way rejoicing.
WEB: Isaiah Chapter 56

[1] Thus says Yahweh, “Keep justice, and do righteousness; for my salvation is near to come, and my righteousness to be revealed. [2] Blessed is the man who does this, and the son of man who holds it fast; who keeps the Sabbath from profaning it, and keeps his hand from doing any evil.”

[3] Neither let the foreigner, who has joined himself to Yahweh, speak, saying, “Yahweh will surely separate me from his people;” neither let the eunuch say, “Behold, I am a dry tree.”
[4] For thus says Yahweh, “To the eunuchs who keep my Sabbaths, and choose the things that please me, and hold fast my covenant: [5] to them I will give in my house and within my walls a memorial and a name better than of sons and of daughters; I will give them an everlasting name, that shall not be cut off. [6] Also the foreigners who join themselves to Yahweh, to minister to him, and to love the name of Yahweh, to be his servants, everyone who keeps the Sabbath from profaning it, and holds fast my covenant; [7] even them will I bring to my holy mountain, and make them joyful in my house of prayer: their burnt offerings and their sacrifices shall be accepted on my altar; for my house shall be called a house of prayer for all peoples.”


Gen 8:1 God remembered Noah, all the animals, and all the livestock that were with him in the ship; and God made a wind to pass over the earth. The waters subsided.
Gen 8:2 The deep's fountains and the sky's windows were also stopped, and the rain from the sky was restrained.
Gen 8:3 The waters receded from the earth continually. After the end of one hundred fifty days the waters decreased.
Gen 8:4 The ship rested in the seventh month, on the seventeenth day of the month, on Ararat's mountains.
Gen 8:5 The waters receded continually until the tenth month. In the tenth month, on the first day of the month, the tops of the mountains were seen.
Gen 8:6 It happened at the end of forty days, that Noah opened the window of the ship which he had made,
Gen 8:7 and he sent forth a raven. It went back and forth, until the waters were dried up from the earth.
Gen 8:8 He sent forth a dove from him, to see if the waters were abated from the surface of the ground,
Gen 8:9 but the dove found no place to rest her foot, and she returned to him into the ship; for the waters were on the surface of the whole earth. He put forth his hand, and took her, and brought her to him into the ship.
Gen 8:10 He stayed yet another seven days; and again he sent forth the dove out of the ship.
Gen 8:11 The dove came back to him at evening, and, behold, in her mouth was an olive leaf plucked off. So Noah knew that the waters were abated from the earth.
Gen 8:12 He stayed yet another seven days, and sent forth the dove; and she didn't return to him any more.
Gen 8:13 It happened in the six hundred first year, in the first month, the first day of the month, the waters were dried up from the earth. Noah removed the covering of the ship, and looked. He saw that the surface of the ground was dried.
Gen 8:14 In the second month, on the twenty-seventh day of the month, the earth was dry.
Gen 8:15 God spoke to Noah, saying,
Gen 8:16 "Go out of the ship, you, and your wife, and your sons, and your sons' wives with you.
Gen 8:17 Bring forth with you every living thing that is with you of all flesh, including birds, livestock, and every creeping thing that creeps on the earth, that they may breed abundantly in the earth, and be fruitful, and multiply on the earth."
Gen 8:18 Noah went forth, with his sons, his wife, and his sons' wives with him.
Gen 8:19 Every animal, every creeping thing, and every bird, whatever moves on the earth, after their families, went out of the ship.
Gen 8:20 Noah built an altar to Yahweh, and took of every clean animal, and of every clean bird, and offered burnt offerings on the altar.
Gen 8:21 Yahweh smelled the pleasant aroma. Yahweh said in his heart, "I will not again curse the ground any more for man's sake, because the imagination of man's heart is evil from his youth; neither will I ever again strike everything living, as I have done.
Gen 8:22 While the earth remains, seed time and harvest, and cold and heat, and summer and winter, and day and night shall not cease."

The Knowledge of Jesus Christ by Mark Copeland