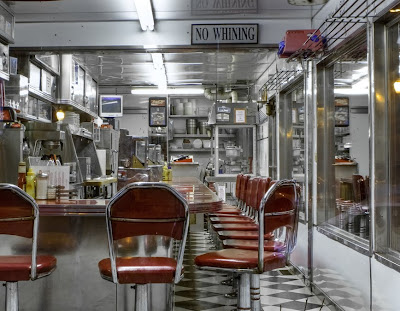 Nice little 50's diner; I used to go to one like it in Jersey called Johnny Rockets. However, Johnny Rockets didn't have the attitude that this little place has. Check out the sign. Tells you a lot doesn't it? Maybe people complain a bit too much here? Maybe the ownership just doesn't care whether they complain or not? Which brings to mind the thought; What do I complain about? What things bother me? And it is really right that I complain in the first place? Given the fact that Job had lost everything, what does it say about him?

Job 3:3-7
3 "Let the day perish in which I was born, The night which said, 'There is a boy conceived.'
4 Let that day be darkness; Don't let God from above seek for it, Neither let the light shine on it.
5 Let darkness and the shadow of death claim it for their own. Let a cloud dwell on it. Let all that makes black the day terrify it.
6 As for that night, let thick darkness seize on it. Let it not rejoice among the days of the year. Let it not come into the number of the months.
7 Behold, let that night be barren. Let no joyful voice come therein. WEB


Job was at a loss what to do and where to go. He felt that he was righteous before God and with good reason. So, he basically said... " Its better if I was never born". But he had a lesson to learn (as I guess we all do) that there is a lot going on in this world beyond our petty problems. Thankfully, by the end of the book he learned that he needed to trust more and think a whole lot less of himself. Complaining (or whining, if you will) doesn't solve a thing, but trusting in the power above all powers is the way to go.
Email ThisBlogThis!Share to TwitterShare to FacebookShare to Pinterest
Newer Posts Older Posts Home
Subscribe to: Posts (Atom)