The other side of Fall 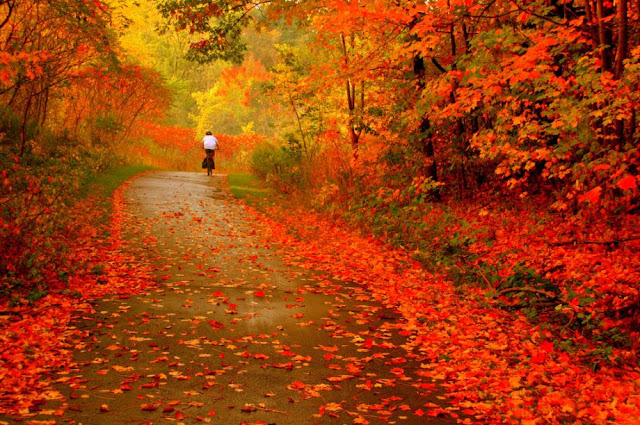 Sometime this upcoming fall, we will be paying our two oldest daughters a visit in New Jersey.  Both Linda and I are looking forward to it with great eagerness because we haven't seen them for some time and because we haven't seen foliage like this in several years.  Frankly, I wish it was fall, NOW!!!  But there is another side to fall, as this passage from the book of Mark will illustrate...

Mark, Chapter 16
14 Afterward he was revealed to the eleven themselves as they sat at the table, and he rebuked them for their unbelief and hardness of heart, because they didn’t believe those who had seen him after he had risen.  15 He said to them, "“Go into all the world, and preach the Good News to the whole creation. 16 He who believes and is baptized will be saved; but he who disbelieves will be condemned.

Fall is a beautiful time of year, with the leaves changing color and the air so crisp and clear.  The smells are different too; mellow somehow.  Wonderful!!!  The other side of Fall is COLD AND WET AND DAMP AND MAYBE EVEN SOME SNOW!!!!  And so how does all this relate to the selected Bible verses?  Simple, we are presented with a choice; believe in God and obey OR disbelieve and be condemned.  Jesus' words, not mine!!!!  I love to focus on the positive side of the choice, to think that everyone will respond positively, but the reality is some people will never believe and pay the penalty for it.  Dear friend, there is another side to both Fall and the Gospel and neither one is very pleasant.  My wish for you is the pleasure of the color of Fall and the wonder of heaven!!!  But, its your choice; choose wisely....
Email ThisBlogThis!Share to TwitterShare to FacebookShare to Pinterest

"ACTS OF THE APOSTLES" Chapter Seven by Mark Copeland