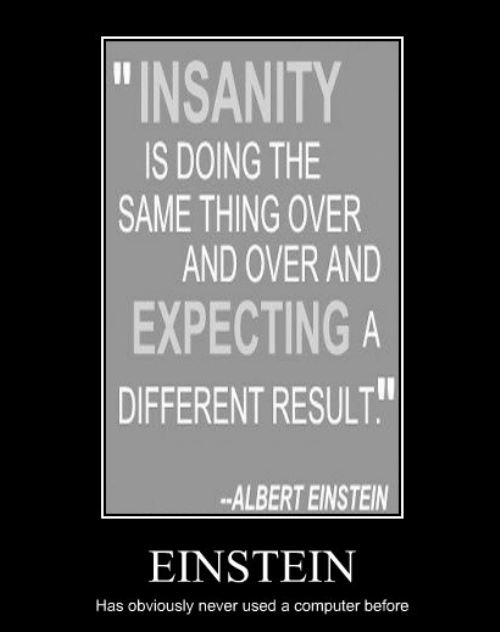 Einstein was an unusual looking character, but don't let that fool you: He was a down-to-Earth person in real life.  He liked to joke and play the violin.  He lived before the current "computer era", in a world of pen and paper and perhaps a abacus or slide rule.  I can only wonder how he would have reacted to the computers of today, and whether or not he would made this famous quote is a matter of conjecture.  One thing is sure: Einstein was NOT CRAZY!  Sometimes exceptionally blessed people are accused of being CRAZY by people who do NOT UNDERSTAND THEM!!!  Here is one such example...

Acts Chapter 26
6 Now I stand here to be judged for the hope of the promise made by God to our fathers,  7 which our twelve tribes, earnestly serving night and day, hope to attain. Concerning this hope I am accused by the Jews, King Agrippa! 8 Why is it judged incredible with you, if God does raise the dead?  9 “I myself most certainly thought that I ought to do many things contrary to the name of Jesus of Nazareth.  10 This I also did in Jerusalem. I both shut up many of the saints in prisons, having received authority from the chief priests, and when they were put to death I gave my vote against them.  11 Punishing them often in all the synagogues, I tried to make them blaspheme. Being exceedingly enraged against them, I persecuted them even to foreign cities.  12 “Whereupon as I traveled to Damascus with the authority and commission from the chief priests,  13 at noon, O king, I saw on the way a light from the sky, brighter than the sun, shining around me and those who traveled with me.  14 When we had all fallen to the earth, I heard a voice saying to me in the Hebrew language, "‘Saul, Saul, why are you persecuting me? It is hard for you to kick against the goads.’"

“He said, "‘I am Jesus, whom you are persecuting.  16 But arise, and stand on your feet, for I have appeared to you for this purpose: to appoint you a servant and a witness both of the things which you have seen, and of the things which I will reveal to you;  17 delivering you from the people, and from the Gentiles, to whom I send you,  18 to open their eyes, that they may turn from darkness to light and from the power of Satan to God, that they may receive remission of sins and an inheritance among those who are sanctified by faith in me.’"

19 “Therefore, King Agrippa, I was not disobedient to the heavenly vision, 20 but declared first to them of Damascus, at Jerusalem, and throughout all the country of Judea, and also to the Gentiles, that they should repent and turn to God, doing works worthy of repentance.  21 For this reason the Jews seized me in the temple, and tried to kill me.  22 Having therefore obtained the help that is from God, I stand to this day testifying both to small and great, saying nothing but what the prophets and Moses said would happen,  23 how the Christ must suffer, and how, by the resurrection of the dead, he would be first to proclaim light both to these people and to the Gentiles.”

24 As he thus made his defense, Festus said with a loud voice, “Paul, you are crazy! Your great learning is driving you insane!”

Agrippa obviously had a problem in accepting the concept of the resurrection from the dead; worldly people sometimes do.  That does not mean it isn't true, it just means that THEY have a problem.  Paul was not crazy, he had just experienced something very unusual.  Great learning should bring a person closer to God, not farther away!!!  Christianity is founded on facts first and foremost; while it is true faith is necessary, historical facts take precedence!!!  If you are a Christian, you are not crazy, God will take care of you in this world AND THE NEXT!!!  Truthfully, I look forward to meeting Albert Einstein and asking him what he thinks of computers.  And I wonder... will he think I AM CRAZY when I tell him about them???

"THE GOSPEL OF MATTHEW" Chapter Twenty-Six by Mark Copeland