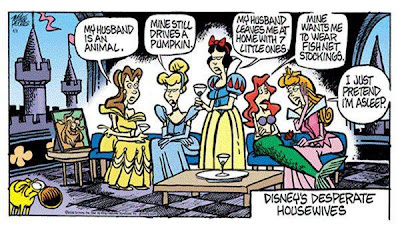 Its somewhat uncomfortable to think about your faults; I mean, who actually LIKES to think about the things you do wrong?  The cartoon brings up a good topic though; even the best of us (perhaps even a magnificent Disney character) can be subject to criticism.  I know I think differently than my spouse and understand that she feels things in a way I will never fully appreciate, but even though we approach things from different perspectives, we can usually come to an agreeable compromise.  For me, this passage is important; I hope it will be to you as well...
WEB: Ephesians Chapter 5

[25] Husbands, love your wives, even as Christ also loved the assembly, and gave himself up for it; [26] that he might sanctify it, having cleansed it by the washing of water with the word, [27] that he might present the assembly to himself gloriously, not having spot or wrinkle or any such thing; but that it should be holy and without blemish. [28] Even so husbands also ought to love their own wives as their own bodies. He who loves his own wife loves himself. [29] For no man ever hated his own flesh; but nourishes and cherishes it, even as the Lord also does the assembly; [30] because we are members of his body, of his flesh and bones. [31] “For this cause a man will leave his father and mother, and will be joined to his wife. The two will become one flesh.” [32] This mystery is great, but I speak concerning Christ and of the assembly. [33] Nevertheless each of you must also love his own wife even as himself; and let the wife see that she respects her husband.

It must be especially hard on the ladies; I mean, having to submit to their husbands when they know that their spouse is wrong.  But, it is what it is and accepting God's will for us eventually will help us grow in our Spirituality.  Love and understanding go a long way to making things WORK and submission to God by every member of a family is the key to a happy home.  To me, the cartoon is funny because unlike the TV show, its "G" rated and a little absurd.  I am having a problem identifying with their husbands though.  Sometimes, I feel like a beast and others like prince charming; the rest I just won't talk about!!!!
Email ThisBlogThis!Share to TwitterShare to FacebookShare to Pinterest

"THE BOOK OF ECCLESIASTES" Chapter Eight by Mark Copeland